Cleveland, Northeast Ohio women to march on January 21, 2023 in Cleveland for reproductive and Civil Rights and against violence, Women's March Cleveland's 6th anniversary....The rally is at 12:30 pm at Market Square Park across from the Westside Market near downtown Cleveland and the march will follow at 1:30 pm 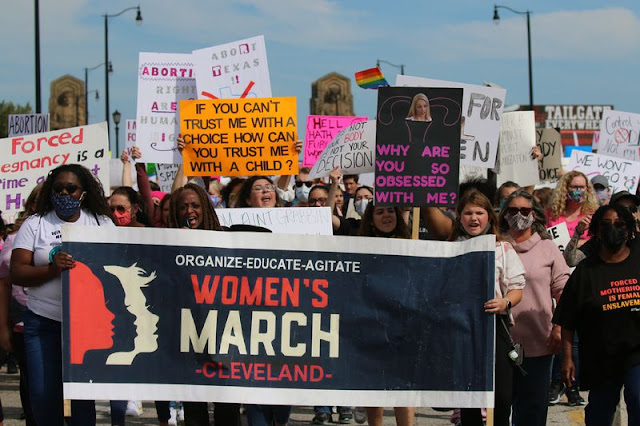 Led by Women's March Cleveland, more than 2,500 people gathered at Market Square in Cleveland on Saturday afternoon, October 2, 2021 to protest laws aimed at women’s reproductive rights in Ohio, Texas, Mississipi and other states across the country.The march was similar to other marches taking place around the United States in more than 500 cities. After the rally at Market Square, the crowd then marched onto the Carnegie Bridge before returning to the square.  (Photo by David Petkiewicz of cleveland.com). Women's March Cleveland will host its sixth anniversary and march that will also serve to commemorate the 50th anniversary of Roe. v Wade on Saturday, Jan 21, 2023, also at Market Square Park across from the Westside Market near downtown Cleveland, Ohio. The rally will begin at 12:30 pm and a march will follow at 1:30 pm.

CLEVELAND, Ohio- Women in Cleveland  and Northeast Ohio will take to the streets in Cleveland on Saturday, Jan. 21, 2023  for Women's March Cleveland's sixth-year anniversary and to commemorate the 50th anniversary of Roe Wade, one of several sister marches nationwide the weekend of Jan 21. Rally speakers include elected officials, reproductive rights and anti-violence advocates, educational and voting rights advocates, and Black mothers who have lost loved ones to homicides in Cleveland. (Event contact tel: (216) 659-0473 and Facebook event page)

The event will begin with a 12:30 pm rally at Market Square Park at W. 25th Street and Lorain Avenue in the city's Ohio City neighborhood, and across from the Westside Market near downtown Cleveland. A 1:30pm march will follow. A march that Women's March Cleveland hosted at Market Square Park in October of 2021 for reproductive rights drew roughly 2,500 people and though Saturday's upcoming march will be smaller like other cities nationwide that are also holding sister rallies and marches to celebrate the anniversary of the now defunct Roe v Wade, it will draw a decent crowd, organizers said, and will be one of the largest sister marches nationwide this weekend.

Organizers said that hundreds are expected. The women say that they are marching for reproductive rights and abortion access, voting and Civil Rights, and to seek to eradicate violence against women Also at issue, they say, are jobs, educational equity, adequate housing and healthcare, equal pay, and the continual fight against racism, sexism, and bigotry.

"We will fight against attempts to erase decades of constitutional protections for women and girls," organizers said on the Facebook event page , which also reveals that Cleveland is slated to host one of the largest sister marches in the country the weekend of Jan. 21.

A grassroots women's rights group comprised primarily of greater Cleveland activist women and first established in 2017 when thousands of women in Cleveland and millions as a whole in sister cities nationwide marched in the streets in their respective cities following then president Donald Trump's inauguration, one of the largest single day marches in American history, Women's March Cleveland has over 4,600 members and in addition to an anniversary march in January of each years it hosts intermittent marches, many of them sister marches with other cities on women's rights The issues they fight for, practically all of them public policy matters impacting women, also include poverty, excessive force, and the nation's intrinsically racist legal system.

But reproductive rights have also become a central premise of the organization, along with rape, murder and other heinous violence against women in the largely Black major American city of Cleveland, a disproportionate number of the victims Black, Hispanic, and poor.

According to organizers, Saturday's march in Cleveland is also a march against the reinstatement of the heartbeat bill in Ohio, a six week abortion ban and state law that took effect after the U.S. The Supreme Court, on June 24, 2022 overturned Roe v Wade and relegated the authority to restrict or outright outlaw abortion to the respective state legislatures nationwide. The  state law is temporarily on hold per the ruling of a Hamilton County judge and as lawsuits over the measure make their way through the courts.

“We also call for a ceasefire on murder and other violence against Cleveland and greater Cleveland women that disproportionately impacts Black women and other women of color," Women's March Cleveland organizers said. "We support all women and we believe in inclusion across racial, ethnic, religious, gender, socioeconomic and other lines. We are true grassroots activists and we are not owned by the establishment or government or corporate interests.