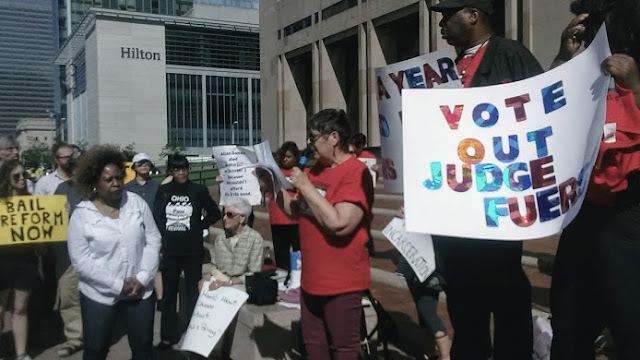 Community activists, led by Alfred Porter Jr of Black on Black Crime Inc. (standing) and Carol Steiner of the County Jail Coalition (center in red shirt), call for the ouster of Cuyahoga County Court of Common Pleas Judge Nancy Fuerst during a rally against nine recent inmate deaths and conditions in the Cuyahoga County Jail at the Justice Center in downtown Cleveland on May 23, 2019. Activists will protest again at the Justice Center on Aug. 15 at 11 am to call for an elected sheriff and reentry reform, and against excessive bonds and sentences that target Blacks, excessive force by police, malicious prosecutions, grand jury tampering, fixed indictments, and for Fuerst to be removed from the  bench  for harassing Black and female activists targeted by racist White cops and corrupt and racist prosecutors in malicious cases before her that she refuses to dismiss even though the speedy trial time has passed . They are also calling on voters to oust County Prosecutor Mike O'Malley,
Post a Comment
Read more
More posts