Showing posts with the label awaits
Show all 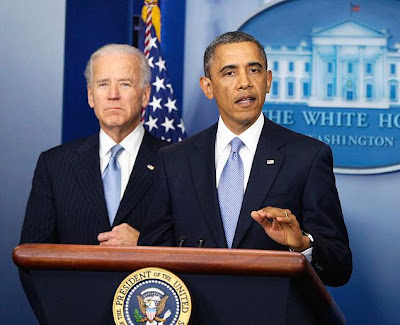 United States President Barack Obama (right) and Vice President Joe Biden By Kathy Wray Coleman, Publisher, Editor-n-Chief, Cleveland Urban News. Com and The Cleveland Urban News.Com Blog, Ohio's Most Read Online Black Newspaper ( www.clevelandurbannews.com ) WASHINGTON, D.C.   -- The bill that averted the fiscal cliff has reached the desk of  President Barack Obama for his signature, though the battle between congressional Republicans and Democrats over tax hikes and spending cuts continues. "Leaders from both parties came together to reach an  agreement that passed with bipartisan support   that  protects 98 percent of Americans and 97 percent of small  business owners from a middle class tax hike," said Obama in a  press release to Cleveland Urban News.Com. "While  neither  Democrats nor Republicans got everything they wanted, this  agreement is the right  thing to do for our country ." The president said also that the" agreement will also g
Post a Comment
Read more
More posts