Showing posts with the label Democratic candidates for office
Show all

Tickets to see Obama in Cleveland September 13 are all gone, Obama set to campaign on healthcare and for Sherrod Brown's reelection, and for Cordray for Ohio governor, and for the entire statewide Democratic ticket, including the only two Blacks running statewide of state treasurer candidate Rob Richardson and Judge Melody Stewart, who is running for a seat on the Ohio Supreme Court, which is currently all- White and all-Republican.... Stewart is a judge of the Ohio 8th District Court of Appeals, which serves Cuyahoga County, the state's second largest of 88 counties statewide, and of which includes the majority Black city of Cleveland....Judge Michael P. Donnelly is a Cuyahoga County Court of Common Pleas judge and is the other Democrat seeking an open seat on the seven-member Ohio Supreme Court....Vote Tuesday, November 6, 2018....By editor Kathy Wray Coleman of Clevelandurbannews.com and Kathywraycolemanonlinenewsblog.com, Ohio's most read Black digital newspaper and Black blog with some 5 million views on Google Plus alone.Tel: (216) 659-0473 and Email: editor@clevelandurbannews.com 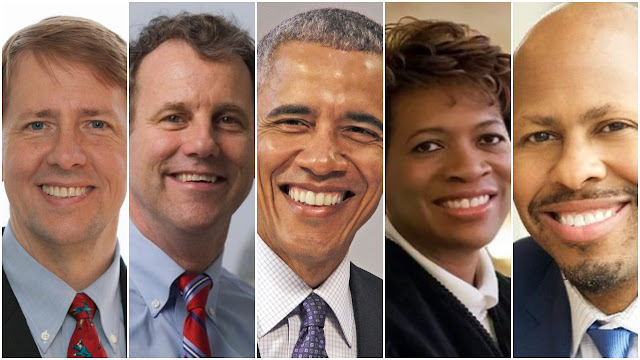 From left: Ohio Democratic gubernatorial nominee Richard Cordray, U.S. Senator Sherrod Brown of Cleveland, former U.S. president Barack Obama, Ohio Supreme Court Democratic candidate Judge Melody Stewart, who currently sits on the Ohio 8th District Court of Appeals, and Rob Richardson, an attorney and the Democratic candidate for state treasurer. Obama will speak at a campaign event supporting fellow Democrats on Sept 13, 2018 in the heart of the Black community on Cleveland's east side. Richardson and Judge Stewart are the only Black Democrats running statewide for the Nov. 6 general election  Clevelandurbannews.com and Kathywraycolemanonlinenewsblog.com , Ohio's most read Black digital newspaper and Black blog with some 5 million views on Google Plus alone.Tel: (216) 659-0473 and Email: editor@clevelandurbanne ws.com. Kathy Wray Coleman, editor-in-chief, and who trained for 17 years at the Call and Post Newspaper in Cleveland, Ohio. We interviewed former president Barac
Post a Comment
Read more
More posts