Wall Street Journal Reporter Zusha Elinson meets with Cleveland activist Kathy Wray Coleman of Women's March Cleveland and Imperial Women Coalition, others over murdered Black women and later reports that there is an 89 percent increase as to unsolved murders of Black women in Cleveland and nationwide, also including Chicago, Los Angeles, and Milwaukee, among others....WSJ Reporter Zusha Elinson told Coleman that Cleveland officials were the most difficult as to turning over public records on the murders of Black women and girls....By Clevelandurbannews.com, Ohio's Black digital news leader 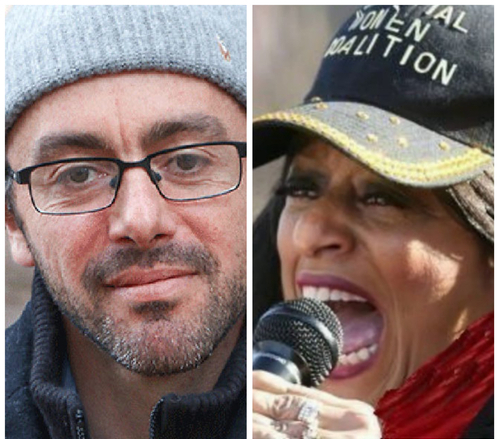 Seasoned Wall Street Journal reporter Zusha Elinson and Cleveland activist and organizer Kathy Wray Coleman, who leads Imperial Women Coalition and Women's March Cleveland. Elinson recently met with Coleman in Cleveland regarding the disproportionate increase in murdered Black women and girls nationwide during the pandemic, including in Cleveland, Chicago, Los Angeles and some other largely Black major American cities. Above Coleman speaks at a rally and march hosted Women's March Cleveland at Public Square in downtown Cleveland, Ohio on Jan 21, 2017. 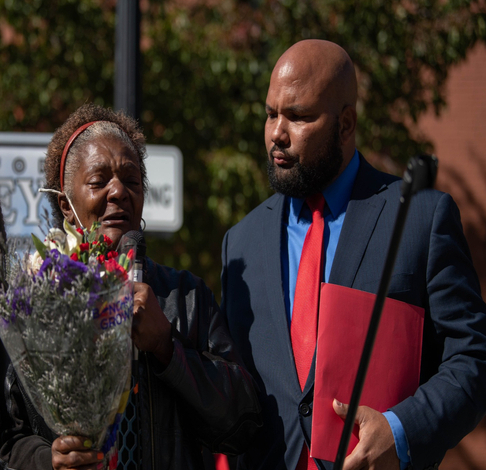 Sandra Dawkins, the mother of 22-year-old Cleveland murder victim Britney Hardwick, whose killer remains at large, and Ward 1 Cleveland councilman Joe Jones at a rally by Women's March Cleveland at Market Square Park on Saturday, Oct. 8, 2022 for reproductive and civil rights and against violence against women. Jones gave welcoming remarks and spoke on the safety of women in Cleveland After the rally, which included elected officials, community members and victims of crime, activists took to the streets and marched
Clevelandurbannews.com and Kathywraycolemanonlinenewsblog.com

CLEVELAND, Ohio-The number of unsolved homicides of Black women and girls rose by 89% in 2020 and 2021 compared with 2018 and 2019, according to a recent survey of 21 U.S. cities by the Wall Street Journal, and in 2019 the murder rate for Black women and girls rose 33%, an increase from 2018, studies show. In 2020, where homicides increased in the midst of the pandemic, the death rate for Black women was nearly equal to that of Black men.

The CDC also reports that roughly 2,077 Black women and girls were killed in 2021, a 51% increase over 2019. Also that year, the number of killings nationwide increased 34% during that time frame, the Wall Street Journal reports. Data for 2022 is being compiled and sources say that the outcomes, though inconclusive, are not much better, and could prove worst.

Meanwhile, nothing significant is being done by authorities and policy makers regarding the epidemic of crime against Black women, which has alarmed community activists and  organizers of largely Black major American cities like Chicago, Los Angeles, and Cleveland, an impoverished city of some 372,000 people.

Cleveland activist and organizer Kathy Wray Coleman, a seasoned activist and organizer who leads Women's March Cleveland and Imperial Women Coalition, a group founded around the murders of 11 Black women on Imperial Avenue in Cleveland by the late serial killer Anthony Sowell, recently interviewed with Wall Street Journal Reporter Zusha Elinson on the matter. According to Coleman, Elinson, a purported San Francisco resident, was in Cleveland in October on the issue for an article published last week and met with city officials, police and activists for interviews that he recorded, as well as the families of some young Black women murdered in Cleveland over the past few years. He met with some of them over dinner or lunch, including Coleman, compliments, he said, of the Wall Street Journal and its publisher Alma Latour, whose name he freely mentioned during interviews and dinner for leverage.

"It is unconscionable to do nothing regarding this epidemic of murdered Black women and girls in largely Black major American cities like Cleveland, Los Angeles and Chicago when an avalanche of data by the CDC and other credible venues continue to show that this has been a crisis for years, and more so since the pandemic" said Coleman. "We call on all stakeholders, including elected officials and policy makers in Cleveland and greater Cleveland, to come together to address this growing problem."

Coleman said that Elinson told her that though he ultimately got them, that city officials in Cleveland were being difficult as to handing over public records on the murders of Black women and girls and that of the major cities he has been investigating relative to the matter Cleveland was allegedly the most reluctant to hand over requested information.

"They are not cooperating," said Elinson of Cleveland city officials and their alleged impropriety in failing to hand over public records in a timely manner upon request.

Per his request, Coleman referred Elinson to family members of unsolved Cleveland murders and community activists for interviews In turn, he interviewed them and recorded them, including activist Alfred Porter Jr, who leads Black on Black Crime Inc., and Sandra Dawkins, 62, the mother of 22-year old Cleveland murder victim Britney Hardwick.

Hardwick was shot and killed in her car in her boyfriend's mother's driveway in the Collinwood neighborhood on Cleveland's east side in December of 2020, and like so many other unsolved murders in Cleveland, her killer remains at large and police say that they have no suspects. Her mother has been critical of Cleveland detectives and investigators saying that "they are not doing enough to find my baby's killer and the killers of so many other Black women are still out there."

Dawkins said that Britney was the youngest of her four adult children and that "they murder Black women with ease because they know they can get away with it and that they will not get caught."

Porter Jr, a seasoned president of Black on Black Crime Inc in Cleveland, said that he is disappointed with Elinson and the Wall Street Journal  because "after meeting with activists and pretending that a fair story would be done, they refused to hold city officials and police accountable for ignoring an epidemic of homicides of Black women and girls in Cleveland and nationwide regarding their investigation." He went on  to call the investigation by Elinson and the Wall Street Journal "a cover up for police and Cleveland city officials and officials elsewhere as to their apathy and the failure to act though obviously knowing that Black women and girls are being murdered in large numbers in Cleveland and throughout this country."