Showing posts with the label FirstEnergy Stadium
Show all 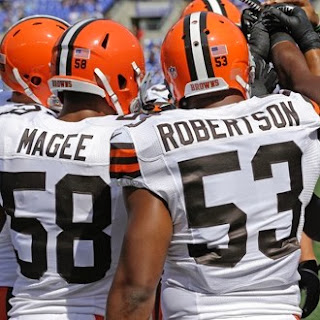 By Kathy Wray Coleman, editor-in-chief,  Cleveland Urban News.Com and  The Kathy Wray Coleman Online News Blog.Com, Ohio's No 1 and   No 2 online Black newspapers  ( www.clevelandurbannews.com ) and  ( www.kathywraycolemanonlinenewsblog.com ).  Reach us by phone at 216-659-0473 and by email at   editor@clevelandurbannews.com FOXBOROUGH, Massachusetts-The Cleveland Browns lost by one point to the New England Patriots on Sunday, falling 27 to 26 in a heartbreaking loss at Gillette Stadium in Foxborough, Mass. Browns Quarterback Jason Campbell, who is Black, passed for 391 yards and three touchdowns, not enough though to bring home a needed win. The Patriots trailed 6 to 0 at halftime. And with 1:25 left in the third quarter, the Browns led 19-3. But that's when Quarterback Tom Brady stepped up his game, ultimately completing 32 of 52 passes, and two touchdowns. With 61 seconds remaining, the Patriots got two touchdowns, and the Browns could not recover. In spite of the t
Post a Comment
Read more
More posts