Showing posts with the label Louisville Cardinals
Show all 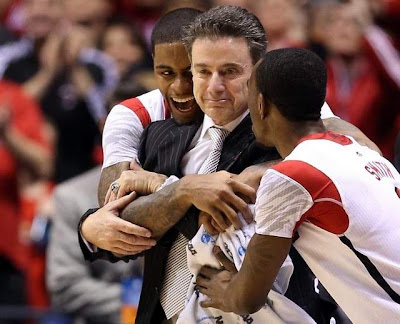 By Kathy Wray Coleman, editor-in-chief, Cleveland Urban News.Com Blog, Ohio's Most Read Online Black Newspaper  ( www.clevelandurbannews.com ) Atlanta GA-Under the leadership of Head Coach Rick Pitino (pictured) the Louisville Cardinal's won the NCAA Championship Monday night, defeating the Michigan Wolverines 82 to 76 at the Georgia Dome in Atlanta GA. It was the third all-time championship win in the school's history and former University of Louisville coach Denny Crum, who took his teams to victory in 1980 and 1986, was there for support. Pitino told reporters after the game that his players were the reason for the victory. "Players put coaches in the  hall of fame," said Pitino, who is among seven inductees to be inducted this year to the Basketball Hall of Fame, its officials announced hours before the game. Spike Albrecht went four-for-four and scored 17 points in assisting in giving the Wolverines a comfortable head start, but at half time the Ca
Post a Comment
Read more
More posts