Judge Solomon Oliver to keynote Cleveland Community Police Commission's public event at Tri-C, Oliver the overseer of the consent decree for police reforms between the city and the U.S. Department of Justice that followed high profile killings by police of unarmed Blacks, including 12-year-old Tamir Rice, Tanisha Anderson, and Malissa Williams and Timothy Russell, whom police gunned down with 137 bullets...The event, which will recognize outgoing commission members and commission partners, is hosted by Cleveland Councilman Matt Zone, chair of the safety committee for city council....Clevelandurbannews.com and Kathywraycolemanonlinenewsblog.com, Ohio's most read digital Black newspaper and Black blog 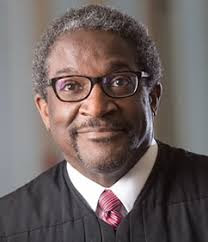 Judge Solomon Oliver Jr., the overseer of the court-monitored consent decree for police reforms between the city of Cleveland and the U.S.  Department of Justice, and a seasoned judge of the  federal bench of the United States District Court for the Northern District of Ohio, which sits in Cleveland Clevelandurbannews.com and Kathywraycolemanonlinenewsblog.com , Ohio's most read digital Black newspaper and Black blog, both also top in Black digital news in the Midwest. Tel: (216) 659-0473. Email: editor@clevelandurbannews.com. Coleman is an experienced Black political reporter who covered the 2008 presidential election for the Call and Post Newspaper in Cleveland, Ohio and the presidential elections in 2012 and 2016 As to the one-on-one interview by Coleman with Obama  CLICK HERE TO READ THE ENTIRE ARTICLE AT CLEVELAND URBAN NEWS.COM, OHIO'S LEADER IN BLACK DIGITAL NEWS . Clevelandurbannews.com and Kathywraycolemanonlinenewsblog.com CLEVELANDURBANNEWS.COM,
Post a Comment
Read more
More posts