Showing posts with the label healthcare
Show all 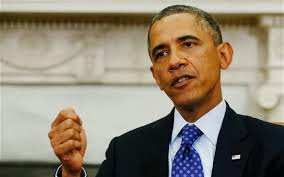 The Associated Press in the White House library in Washington interviewed President Barack Obama on the partial government shutdown initiated earlier this month. Obama, who successfully ran for president as a first-term senator, spoke critically about first-term Republican senators, such as Ted Cruz of Texas, who have been leading efforts to shut the government if Republicans can't extract concessions from the White House. He said that when he was in the Senate, he "didn't go around courting the media." And I certainly didn't go around trying to shut down the government, he said. Cleveland Urban News.Com and The Kathy Wray Coleman Online News Blog.Com, Ohio's No 1 and No 2 online Black news venues  ( www.clevelandurbannews.com )   Reach Cleveland Urban News.Com by email at editor@clevelandurbannews.com and by phone at 216-659-0473 By the Associate Press WASHINGTON, D.C.-THE PRESIDENT: So what I've said to them is this: Make sure that the United
Post a Comment
Read more
More posts