Showing posts with the label DOMA
Show all 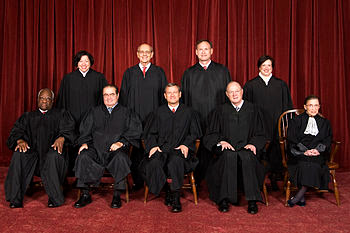 By Kathy Wray Coleman, editor-in-chief,  Cleveland Urban News.Com and The Kathy Wray Coleman Online News Blog.Com, Ohio's No 1 and No 2 online Black newspapers  ( www.clevelandurbannews.com ).  Reach Cleveland Urban News.Com by email at editor@clevelandurbannews.com and by phone at 216-659-0473 WASHINGTON, D.C-The U.S. Supreme Court on Wednesday issued two celebrated rulings to bolster the gay rights movement, historical decisions that come on the heels last year of President Obama's announcement of his support of gay marriage, and the echoing of that posture by the NAACP, the nations' oldest and most respected Civil Rights organization. One case gives federal benefits to spouses of same-sex marriage and the other in essence struck down Proposition 8   through the court's refusal to hear the appeal of a lower court ruling that invalidated it.  Adopted by California voters in 2008 that outlawed gay marriage, the defeat of Proposition 8 became a baby of the gay rig
Post a Comment
Read more
More posts