Showing posts with the label anniversary article
Show all

Remembering former Ohio Congresswoman Stephanie Tubbs Jones of Cleveland on the 10th anniversary of her death on August 20, 2008 and a reprint of the one-on-one interview by journalist Kathy Wray Coleman with Tubbs Jones, Ohio's first Black congresswoman, shortly before her untimely death, a cover story published by the Call and Post Newspaper, Ohio's most prominent Black print newspaper.....This was her last major interview before her death....Tubbs-Jones said in the interview that sexism is sometimes stronger than racism...."All you have to do is look at how many women there are in the senate, how many women there are in the house compared to the number of men, how many women governor's there are, women elected officials, women in the board rooms, and CEOs in large companies. We have come a long way, but we've got a long way to go," said Tubbs Jones....By Clevelandurbannews.com and Kathywraycolemanonlinenewsblog.com, Ohio's most read Black digital newspaper and Black blog with some 5 million views on Google Plus alone.Tel: (216) 659-0473 and Email: editor@clevelandurbannews.com 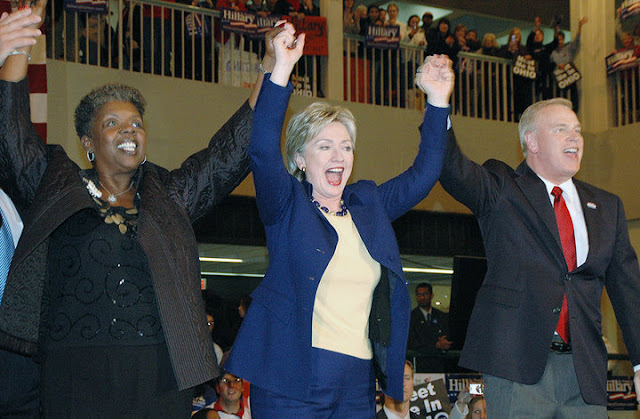 The late former U.S. Congresswoman Stephanie Tubbs Jones (far left), a Cleveland Democrat, then U.S. senator Hillary Rodham Clinton of New York, a former first lady, former U.S. secretary of state, and the 2016 Democratic nominee for president who lost to now President Donald Trump, and former Democratic Ohio Gov. Ted Strickland at a campaign event in Ohio during Clinton's unsuccessful campaign for the Democratic nomination for president of the United States of America in 2008 against Barack Obama (Obama was elected president in 2008 and was the nation's first Black president. He was reelected for a second term in 2012) Clevelandurbannews.com and Kathywraycolemanonlinenewsblog.com , Ohio's most read Black digital newspaper and Black blog with some 5 million views on Google Plus alone.Tel: (216) 659-0473 and Email: editor@clevelandurbannews.com. Kathy Wray Coleman, editor-in-chief, and who trained for 17 years at the Call and Post Newspaper in Cleveland, Ohio. We in
Post a Comment
Read more
More posts