Women's March Cleveland objects to Trump's racist insults of Black American women journalists Abby Phillip, Yamiche Alcindor and April Ryan, all of whom have challenged his policies, insults that are disgusting and dangerous, CNN reports.....This is why we march....Join us at 10:30 am on January 19, 2019 for Women's March Cleveland Anniversary March on Public Square in downtown Cleveland, Ohio, which will be followed by a 1 pm program at Old Stone Church, also on Public Square....Clevelandurbannews.com and Kathywraycolemanonlinenewsblog.com, Ohio's most read Black digital newspaper and Black blog with some 5 million views on Google Plus alone.Tel: (216) 659-0473 and Email: editor@clevelandurbannews.com 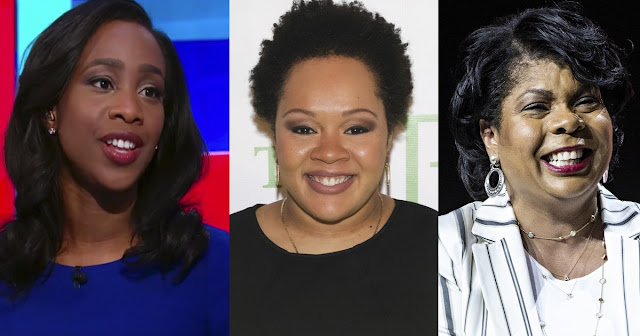 Prominent Black women journalists Abby Phillip, Yamiche Alcindor, and April Ryan, all three of whom are under attack for challenging President Donald Trump and his policies, a racist gesture, says CNN, and Women's March Cleveland  CLEVELANDURBANNEWS.COM, CLEVELAND, Ohio-CNN is annoyed with President Trump's hostile comments against prominent Black journalists April Ryan, Abby Phillip, and Yamiche Alcindor. Read the article below. Women's March Cleveland objects to President Trump's hostile and racist attacks on Black women. This is why we march. CNN-It's not your imagination: President Trump, who regularly makes a point of personally insulting public figures who challenge or displease him in any way, taps into an especially toxic well of vitriol when aiming his attacks at black Americans.  CLICK HERE TO GO TO THE FACEBOOK EVENT PAGE OF WOMEN'S MARCH CLEVELAND 2019 ANNIVERSARY MARCH WITH OVER SEVEN THOUSAND PEOPLE INTERESTED OR GOING TO DATE AS TO THIS
Post a Comment
Read more
More posts