Showing posts with the label Judge Kavanaugh confirmed for U.S. Supreme Court by the U.S. Senate
Show all 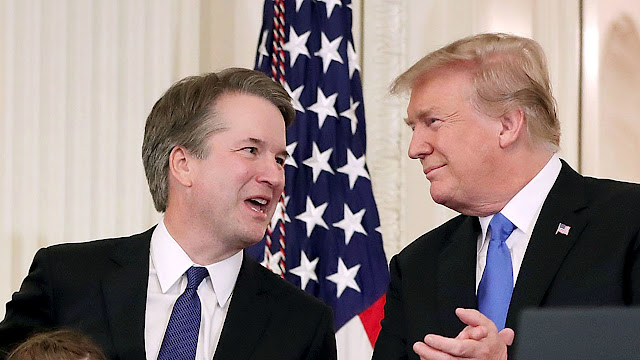 Judge Brett Kavanaugh (left) and President Donald Trump  WASHINGTON (AP) — The bitterly polarized U.S. Senate narrowly confirmed Brett Kavanaugh on Saturday to join the Supreme Court, delivering an election-season triumph to President Donald Trump that could swing the court rightward for a generation after a battle that rubbed raw the country's cultural, gender and political divides. The near party-line vote was 50-48, capping a fight that seized the national conversation after claims emerged that Kavanaugh had sexually assaulted women three decades ago — which he emphatically denied. Those claims magnified the clash from a routine Supreme Court struggle over judicial ideology into an angrier, more complex jumble of questions about victims' rights, the presumption of innocence and personal attacks on nominees. Acrimonious to the end, the battle featured a climactic roll call that was interrupted several times by protesters in the Senate Gallery before Capitol Police re
Post a Comment
Read more
More posts