Showing posts with the label brother
Show all

Remembering Louis Farrakhan, Jr, brother, father, friend, soldier, and the eldest son of the Honorable Minister Louis Farrakhan...ClevelandUrbanNews.Com and the KathyWrayColemanOnlineNewsBlog.Com, Ohio's most read digital Black newspapers with some 5 million readers on Google Plus alone. And the ClevelandUrbanNews.Com website stats reveal some 26 million hits since 2012. Tel: (216) 659-0473. Email: editor@clevelandurbannews.com

By Richard B. Muhammad and Eric Ture Muhammad Remembering Louis Farrakhan, Jr. - Brother, Believer, Father, Friend, Soldier  and the Eldest Son of the Honorable Minister Louis Farrakhan The Nation, family and friends remember the life and contribution of Louis Farrakhan, Jr. Share   on Facebook By   Finalcall.com CHICAGO - Light shone through the domed ceiling of Mosque Maryam and what had been a rainy and overcast day became bright. The sunshine and its energy reflected the spirit buzzing in the sanctuary at the homegoing service of Louis E. Farrakhan, Jr., the eldest  on Facof the internationally known Nation of Islam minister Louis Farrakhan and his wife Khadijah Farrakhan. The sanctuary was filled with family, Muslims, well-wishers and old friends to celebrate and remember a man known for his brotherhood, brilliance and humor. While there was certainly sadness and a few tears shed, there was no grief as the Muslim funeral service and fond memories kept a great loss bal
Post a Comment
Read more

Michelle Obama's brother to speak tonight, Oct, 2, in Cleveland at 7 pm at Greater Abyssinia Baptist Church, 1161 E. 105th St. at get out the vote rally 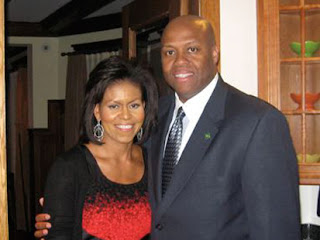