Showing posts with the label black women
Show all

Thousands of Black women march on Washington on September 30, 2017, taking on President Trump, calling out the names of Black women and girls subjected to heinous violence, and citing statistics that show that Black women and girls remain at risk in comparison to White women and girls, from mass incarceration to education, malicious prosecution, police brutality, job inequality, healthcare, murder and rape, and other heinous crimes of violence....And the list goes on....By editor Kathy Wray Coleman of Clevelandurbannews.com and Kathywraycolemanonlinenewsblog.com, Ohio's most read Black digital newspaper and Black blog with some 4.5 million views on Google Plus alone.Tel: (216) 659-0473 and Email: editor@clevelandurbannews.com 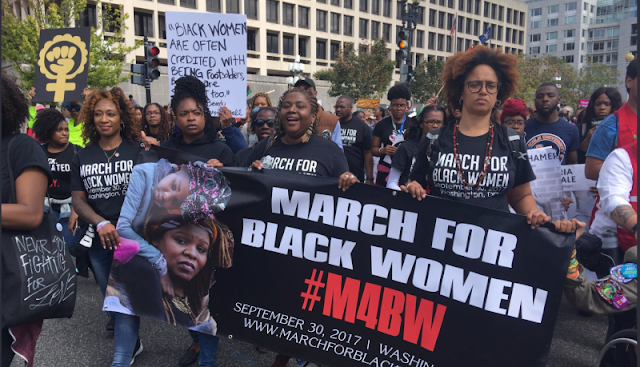 Clevelandurbannews.com  and  Kathywraycolemanonlinenews blog.com ,  Ohio's most read Black digital newspaper and Black blog with some 4.5 million views on Google Plus alone.Tel: (216) 659-0473 and Email: editor@clevelandurbannews.com. Kathy Wray Coleman, editor-in-chief, and who trained for 17 years at the Call and Post Newspaper in Cleveland, Ohio. We interviewed former president Barack Obama one-on-one  when he was campaigning for president. As to the Obama interview,   CLICK HERE TO READ THE ENTI RE ARTICLE AT CLEVELAND URBAN NEWS.COM, OHIO'S LEA DER IN BLACK DIGITAL NEWS . By Kathy Wray Coleman, editor-in-chief CLEVELAND URBAN NEWS.COM-WASHINGTON, D.C. -Thousands of Black women and their supporters marched on Washington, D.C. on Saturday,  a march led by Black women and sponsored by the Black Women’s Blueprint, Black Youth Project 100 and Trans Sisters of Color Project. Black female victims of violence, punctuated by a chant of “Say her name!” were cited as women
Read more

Imperial Women, other activists groups to hold Imperial Avenue rally on Saturday, May 11, 2013 at 5:30 pm on Imperial Avenue in Cleveland to remember the 11 Black women murdered on the street by serial killer Anthony Sowell, to call attention on the need for more focus to be given by police and other authorities to finding missing Black and other minority women, and to rally for Cleveland police to solve the rape and murders of Jazmine Trotter, 20, and Christine Malone, 45, both Black women

CLEVELAND, Ohio- The Imperial Women and other community activists groups will hold a rally at 5:30 pm on Saturday, May 11, 2013 on East 123rd and Imperial Ave. in Cleveland to remember the 11 Black women (pictured below) raped and murdered on the street at the home of convicted serial killer Anthony Sowell and to call attention to the need for more focus to be paid to find Black and other minority women that are abducted, raped and murdered. The rally will also call for police to find the assailants that raped and murdered Christine Malone 45, and Jazmine Trotter, 20, (both pictured below) in March of this year. They too are Black women. For more information contact The Imperial Women at 216-659-0473. (For directions take downtown Cleveland to Kinsman Ave. Take Kinsman to E. 123rd St and turn left. Go three blocks to Imperial Ave.) Serial Killer Anthony Sowell Speakers include the Malone family, Black elected officials including Cleveland Ward 6 Councilwoman Mamie Mitchell,
Post a Comment
Read more

Unofficial voting ballot of The Imperial Women endorsements for the March 6, 2012 primary in Cuyahoga County, Ohio