Cleveland Urban News.Com Editor Kathy Wray Coleman talks face-to-face with Tavis Smiley during his visit to Cleveland for a radio and television broadcast with area judges on the heroin crisis. and the legal system in general...Smiley also comments to Coleman on LeBron James and the Kardashians at the G-Lancer 21 restaurant in Cleveland....Smiley has called Trump's election as president the "GOP's seal of racism, sexism and classicism"....Smiley and Dr Cornel West have also called President Obama to task and have demanded more aggression on his part for the Black community....Some agree while others say Obama speaks through his pro-Black policies and that his actions are limited in a still vividly racist America where congressional Republicans control both the House and the Senate....Read here when Smiley's broadcast on the heroin crisis will run this week on WCPN 90.3 FM radio and on television per WVIZ/PBS's '"The Tavis Smiley Show" 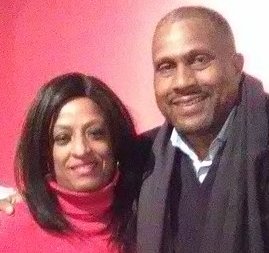 WVIZ /PBS nationally syndicated talk show host and Civil Rights activist Tavis Smiley and Cleveland Urban News.Com Editor-in-Chief Kathy Wray Coleman in Cleveland, Ohio on Wednesday, Dec 7, 2016 at G-Lancer 21. Coleman was on a date and ran into Smiley at the restaurant and he advised that he was in Cleveland to do a taping on the opiate and heroin crisis in Cuyahoga County, which includes the majority Black major American city of Cleveland.  G-Lancer 21, a restaurant at East 21st Street and Superior Avenue in Cleveland on the city's largely Black east side of town, a take off from the now defunct historic Lancer's restaurant that was known internationally  Dr Cornel West ( www.clevelandurbannews.com ) /   ( www.kathywraycolemanonlinenewsblog.com ). Ohio's most read Black digital newspaper and Black blog.Tel: (216) 659-0473 and Email: editor@clevelandurbannews.com By Editor-in-Chief  Kathy Wray Coleman, a-24-year journalist who trained at the
Read more
More posts