Showing posts with the label Colin Powell. supports
Show all 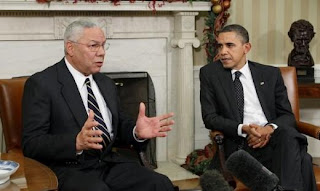 Colin Powell (left) and President Barack Obama By Kath y Wray Coleman, Editor, Cleveland Urban News. Com and The Kathy Wray Coleman Online News Blog.Com ( www.kathywraycolemanonlinenewsblog.com ) and ( www.clevelandurbannews.com ) Colin Powell, the former chairman of the Joint Chiefs of Staff and Secretary of State under former president George W. Bush, and the first Black in those roles, last week announced his support of Democratic President Barack Obama's endorsement of same sex marriage, a rare position taken by a prominent Republican operative such as Powell, who had previously opposed same sex marriage. But Powell would not endorse the president as he did as a Republican in 2008, raising questions on whether he will or will not do so prior to the November 6 presidential election when Obama will square off with Mitt Romney, the presumptive nominee of the Republican Party and the former governor of Mass., the first state to hand out licenses to people marrying partners of
Post a Comment
Read more
More posts