Showing posts with the label Sixth Circuit Court of Appeals. reverses
Show all 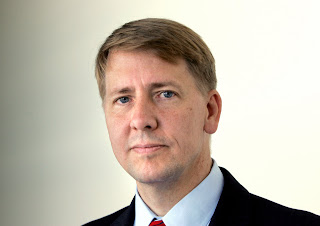 Richard Cordray From the Metro Desk of Cleveland Urban News.Com and the Kathy Wray Coleman Online News Blog.Com ( www.kathywraycolemanonlinenewsblog.com ) and ( www.clevelandurbannews.com ) CINCINNATI, Ohio – On Friday, nine Cleveland-area physicians who provide health care to poor patients through the Medicaid program, and were blocked by state law from expressing their support for then-Ohio Attorney Gen eral Richard Cordray through campaign contributions to his 2010 race to retain his seat, won their appeal to the federal Sixth Circuit Court of Appeals in Cincinnati , Oh., which determined that the law violated the free speech clause of the First Amendment and was therefore unconstitutional. At issue were efforts by the physicians to block Republican Secretary of State Jon Husted from enforcing an Ohio statute, also known as a state law, that makes it a crime for Ohio attorney-general and county-prosecutor candidates to accept campaign contributions from physicians who serve Me
Post a Comment
Read more
More posts