President Obama leads 50th anniversary ceremony of Civil Rights March on Washington, Congressional Black Caucus chair Rep. Fudge of Ohio among speakers, Fudge said that Congress must pass a jobs bill to help Blacks, all Americans and that "it is up to Congress to make sure no child goes hungry to school or bed," Bill Clinton said that "a Democracy does not make it harder to vote than an assault weapon" 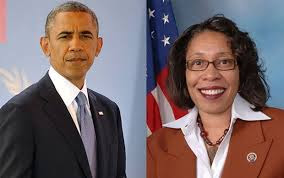 President Barack Obama and Congresswoman Marcia L. Fudge (D-11) of Ohio, who is also chair of the Congressional Black Caucus of  Blacks in Congress By Kathy Wray Coleman, editor-in-chief,  Cleveland  Urban News. Com and The Kathy Wray Coleman Online News Blog.Com, Ohio's No 1 and No 2 online Black newspapers  ( www.kathywraycolemanonlinenewsblog.com ) and ( www.clevelandurbannews.com ). Reach us by phone at 216-659-0473 and by email at  editor@clevelandurbannews.com .  Kathy Wray   Coleman is a former biology teacher and a 20-year investigative Black journalist who trained for some 15 years at the Call and Post Newspaper . "Because they marched, America changed, the doors of equal opportunity swung open...."  President Barack Obama  at the 50th  anniversary ceremony on the March on Washington on August 28, 2013 "But a great Democracy does not make it harder to vote than an assault weapon..." Former President Bill Clinton  at the 50th  anniversary ceremo
Post a Comment
Read more
More posts