Showing posts with the label John Kasich
Show all

Ohio State Senator Shirley Smith announces a possible run for Cuyahoga County executive in wake of announcement last month by County Executive Ed FitzGerald that he will run for governor against Republican John Kasich next year, Smith, a Cleveland Democrat, is the first Black to announce (Editor's Note: Smith will hold an information and expungement clinic open to the public with law enforcement officials and affiliates of the OBCI relative to a new state law for exungement of select criminal records that she co-sponsored that Kasich supported, the clinic is for people that qualify to have criminal records sealed under the new law and will be held on May 23 at 4 pm at the CSU Wolstein Center, 2000 Prospect Ave in Cleveland, people with criminal warrants should consult an attorney first, Blacks get harsher criminal sentences than their White counterparts in the Cuyahoga County Court of Common Pleas led by Chief Judge Nancy Fuerst, a Cleveland NAACP study that is gathering dust to protect the establishment found) 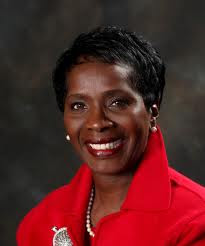 Ohio State Senator Shirley Smith (D-21), a Cleveland Democrat By Kathy Wray Coleman, editor-in-chief,  Cleveland Urban News.Com and The Kathy Wray Coleman Online News Blog.Com, Ohio's No 1 and No 2 online Black news venues  ( www.clevelandurbannews.com )  Reach Cleveland Urban News.Com by email at editor@clevelandurbannews.com and by phone at 216-659-0473 CLEVELAND, Ohio- Ohio state Sen. Shirley Smith (D-21) is the first Black to announce that she might run for Cuyahoga County executive next year in the wake of a formal announcement late last month by County Executive Ed FitzGerald, a Democrat like Smith and former FBI agent and Lakewood mayor, that he will not seek reelection and will instead run as the likely Democratic nominee against Republican John Kasich in the 2014 gubernatorial election.  A prior state representative and state senator since 2007, Smith would not go into detail with Cleveland Urban News.Com on her proposed run for one of the most powerful offices
Post a Comment
Read more
More posts