Showing posts with the label Latonya Goldsby
Show all

Mamie Till awards are given to Cleveland activists (from left) Mariah Crenshaw, Latonya Goldsby of Black Lives Matter, Betty Mahone and Donna Walker Brown, Crenshaw saying to the establishment in her acceptance speech that "we will fight you in the streets and take you down before you take everything that belongs to us.".....Walker Brown called Mamie Till, the late mother of famously lynched teen Emmett Till, her hero....Cassandra McDonald of the Euclid NAACP was the keynote speaker and Cherima Chungag, who leads the Black Women's Center, and Mikki Smith were the mistresses of ceremonies....The event was produced by activist Genevieve Mitchell and sponsored by the Black Women's Center in cooperation with the Cleveland African-American Museum....Others involved include activists David and Marva Patterson, Karen Abdul Nafi, Art McKoy, and Frances Caldwell of the African-American Museum, and Pastor Barbara Elkins...By editor Kathy Wray Coleman of Clevelandurbannews.com and Kathywraycolemanonlinenewsblog.com, Ohio's most read Black digital newspaper and Black blog with some 5 million views on Google Plus alone.Tel: (216) 659-0473 and Email: editor@clevelandurbannews.com 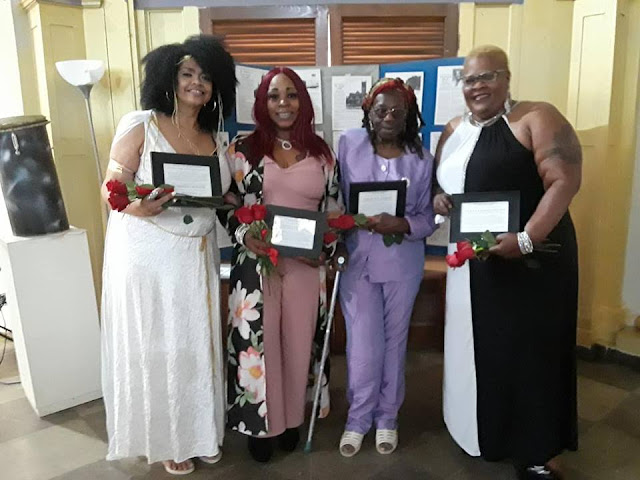 From left: Greater Cleveland activists Mariah Crenshaw of East Cleveland, Latonya Goldsby of Black Lives Matter Cleveland, Betty Mahone of the Black Women's Federation and Donna Walker Brown of the Republican Inner City Movement of Cleveland pose  at an event on Aug 28 at the African-American Museum on Crawford Road in Cleveland  as recipients of the  Mamie Till Community Memorial and Courage Award Clevelandurbannews.com and Kathywraycolemanonlinenewsblog.com , Ohio's most read Black digital newspaper and Black blog with some 5 million views on Google Plus alone.Tel: (216) 659-0473 and Email: editor@clevelandurbannews.com. Kathy Wray Coleman, editor-in-chief, and who trained for 17 years at the Call and Post Newspaper in Cleveland, Ohio. We interviewed former president Barack Obama one-on-one when he was campaigning for president. As to the Obama interview, CLICK HERE TO READ THE ENTIRE ARTICLE AT CLEVELAND URBAN NEWS.COM, OHIO'S LEADER IN BLACK DIGITAL NEWS . By
Post a Comment
Read more
More posts