Showing posts with the label Anthony Weiner
Show all 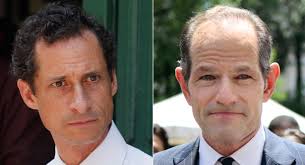 Anthony Weiner, left, and Eliot Spitzer. Weiner is a former congressman who lost a bid for New York City mayor in Tuesday's Democratic primary. He resigned from Congress in 2011 following a sexting scandal where he sent cell phone photographs of himself and his penis to hundreds of women. Spitzer lost the Democratic primary for city comptroller. He resigned as governor of New York in 2008 after admitting to paying a prostitute for sex. While Weiner came in dead last with only 4.9 percent of the vote, Spitzer came in second in his race and lost with 48 percent of the vote. Weiner's wife Huma Abedin is a former aide to former U.S. Secretary of State Hillary Clinton. By  Kathy Wray Coleman, editor-in-chief,    Cleveland Urban News. Com and The Kathy Wray Coleman Online News Blog.Com, Ohio's No 1 and No 2 online Black newspapers  ( www.kathywraycolemanonlinenewsblog.com ) and ( www.clevelandurbannews.com ). Reach us by phone at 216-659-0473 and by email at  editor@clevelan
Post a Comment
Read more
More posts