Showing posts with the label Judge Joe Russo
Show all

Former Cleveland schools CEO Barbara Byrd-Bennett sentenced to prison for theft as CEO of Chicago schools and her daughter, Cuyahoga County Clerk of Courts Nailah Byrd, is crooked too, say community activists, who call for an investigation of the younger Byrd for falsifying case dockets to alter criminal indictments to increase charges and penalties against Blacks falsely accused of assaulting corrupt White cops and without a court order or another grand jury indictment, and for illegally canceling legitimate bonds to keep maliciously prosecuted Blacks in jail.....Community activists say Nailah Byrd should be fired for her documented public corruption and that "the apple does not fall far from the tree "....Others involved in public corruption in Cuyahoga County, which includes the city of Cleveland, include corrupt attorneys such as William McGinty and Donald Butler, of the law firm Donald Butler & Associates, the white male judges Russo of the Cuyahoga County Common Pleas Court, three of them, and Judge John O'Donnell, who has stolen a wealth of homes from county residents for JPMorgan Chase Bank and others via illegal foreclosures...By editor Kathy Wray Coleman of www.clevelandurbannews.com and www.kathywraycolemanonlinenewsblog.com, Ohio's Black digital news leaders 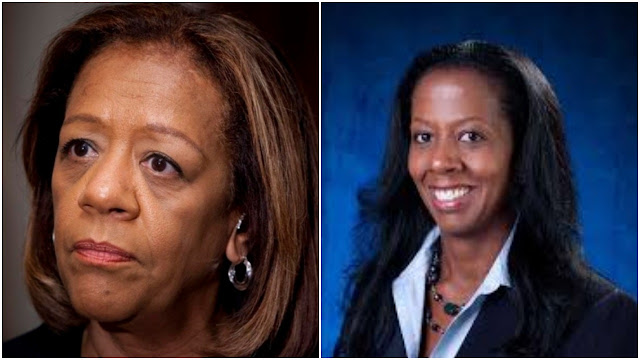 Convicted felon and former Cleveland and Chicago schools CEO Barbara Byrd- Bennett (left), and her daughter, Nailah Byrd, currently the Clerk of Courts for Cuyahoga County, which includes the city of Cleveland, and of whom community activists say is also corrupt like her mother, both of them having done in underprivileged Black people at their leisure and via documented public corruption ClevelandUrbanNews.Com  and the    KathyWrayColemanOnlineNewsBlog.Com  , Ohio's most read digital Black newspapers with some 4 million readers on Google Plus alone. And the  ClevelandUrbanNews.Com  website  stats reveal some 26 million hits since 2012. Tel: (216)  659-0473. Email: editor@clevelandurbannews.com.  Kathy Wray Coleman, editor-in-chief, and who trained for 17 years at the Call and Post Newspaper in Cleveland, Ohio. We interviewed former president Barack Obama one-on-one  when he was campaigning for president. As to the Obama interview,   CLICK HERE TO READ THE ENTIRE ARTICLE
Read more
More posts