Showing posts with the label Cavaliers beat Lakers
Show all

Kyrie is back as he and Kobe dazzle fans at the Q as Cavaliers beat the Lakers 100 to 94, Cavs Coach Byron Scott says excellent defense was key to winning 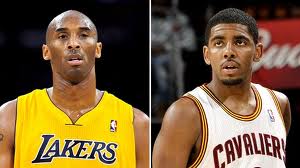 Kobe Bryant, left, and Kyrie Irving Cleveland Cavaliers Coach Byron Scott By Karl Kimbrough, Sportswriter, Cleveland Urban News. Com, Ohio's Most Read Online Black Newspaper ( www.clevelandurbannews.com ) CLEVELAND, Ohio-The Quicken Loan arena was a buzz Tuesday night. You could tell something special was about to happen. The fans who came to see the Cleveland Cavaliers take on the Los Angeles Lakers were not disappointed as the Cavs would win 100 to 94. After the game Cavaliers Coach Bryon Scott said that his team came through because of excellent defensive strategies, though he acknowledged that Kyrie helped too.  “As much as we talk about Kyrie, as much as we talk about some of the other individuals  who had great games, defensively we were great, really, for 48 minutes," said Scott. "We played some of our best defense.”  After three long weeks of absence, Kyrie Irving was back, and he brought his awe inspiring skill set with him. Adding spice to this ma
Post a Comment
Read more
More posts