Showing posts with the label 2018 first Democratic debate
Show all 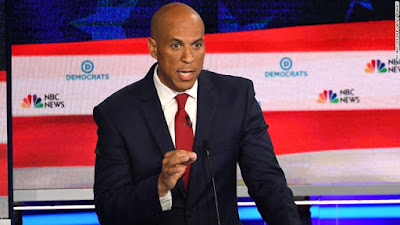 New Jersey Congressman Cory Booker (D-NJ) by  Julio Rosas  | June 26, 2019 11:18 PM MIAMI, FLORIDA- Cory Booker lamented during the Democratic debate that African American trans Americans are not included enough on the conversation of civil rights. "Look, civil rights is someplace to begin, but in the African American civil right community, another place to focus was to stop the lynching of African Americans. We do not talk enough about trans Americans, New Jersey Congressman Coryespecially African American trans Americans and the incredibility high rates of murder now," the New Jersey senator said. "We don't talk enough how many children, about 30% of LGBTQ kids, who do not go to school because of fear. It’s not enough to be on the Equality Act...we need to have a president that will fight to protect LGBTQ Americans every single day from violence," he said. CLICK HERE TO READ THE FULL STORY AT WASHINGTON EXAMINER.COM Clevelandurbannews
Post a Comment
Read more
More posts