Cleveland activists picket at City Hall against six recent Cuyahoga County Jail deaths, unfair sentencing by the judges, juveniles tried as adults and illegally convicted, mass incarceration, injustice relative to Peter Kenney Jr., and police, judicial and prosecutorial malfeasance, a rally led by Black on Black Crime Inc....Activist Alfred Porter Jr. called out Cuyahoga County Prosecutor Mike O'Malley and Common Pleas Judge Nancy Fuerst for alleged malfeasance and alleged racism, and for allegedly pushing malicious and illegal prosecutions for corrupt and racist White cops against Blacks, women and community activists, and said that police do as they please to Blacks in Cleveland and Cuyahoga County, and without repercussions...Porter also talked about the six recent deaths in the Cuyahoga County Jail that have precipitated an urgent FBI investigation, investigators saying two of the deaths were suicides, two were from drug overdoses, and another two are still under investigation.....By editor Kathy Wray Coleman of Clevelandurbannews.com and Kathywraycolemanonlinenewsblog.com, Ohio's most read Black digital newspaper and Black blog with some 5 million views on Google Plus alone.Tel: (216) 659-0473 and Email: editor@clevelandurbannews.com 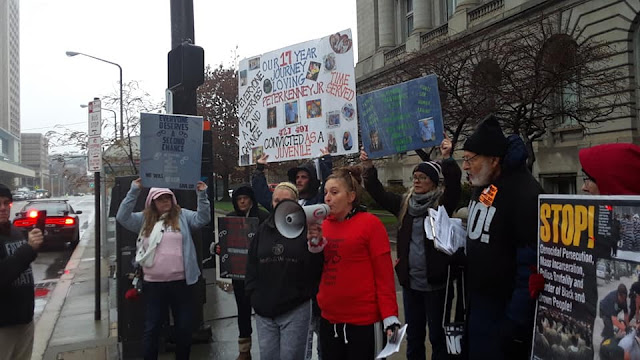 Cleveland activists picket outside of Cleveland City Hall on Nov 9 against six recent deaths in the Cuyahoga County jail, unfair sentences by judges, mass incarceration and judicial, prosecutorial and police malfeasance. They also said they want parole, jail and prison reform and the release of Peter Kenney Jr from prison. Kenney was convicted as a juvenile of aggravated murder in 2001 and has spent 17 years in prison. His family and attorneys say he is innocent and was denied a fair trial. He has lost all of his appeals Clevelandurbannews.com and Kathywraycolemanonlinenewsblog.com , Ohio's most read Black digital newspaper and Black blog with some 5 million views on Google Plus alone.Tel: (216) 659-0473 and Email: editor@clevelandurbannews.com. Kathy Wray Coleman, editor-in-chief, and who trained for 17 years at the Call and Post Newspaper in Cleveland, Ohio. We interviewed former president Barack Obama one-on-one when he was campaigning for president. As to the Obama interv
Post a Comment
Read more
More posts