Showing posts with the label Civil Rights activist
Show all 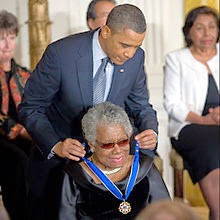 United States President Barack Obama bestows the Presidential Metal of Freedom on Maya Angelou in 2011 Famed author, poet, actress,  movie producer  and Civil Rights activist Maya Angelou (April 4, 1928- May 28, 2014).  Among a host of achievements,   Angelou received the Presidential Metal of Freedom from United States President Barack Obama, America's first Black president, in 2011.   " She lived a life as a teacher, activist, artist  and  human being. She was a warrior for equality, tolerance and peace.  The  family is extremely appreciative of the time we had with her and we know that she is looking down upon us with love..." Guy Love, son of Maya Angelou. By Kathy Wray Coleman, editor-n-chief,  Cleveland Urban News. Com and The Cleveland Urban News.Com Blog,  O hio's Most Read Online Black Newspaper and Newspaper Blog  K a thy Wray Coleman is  a community activist and 20 year investigative journalist who trained for 17 years at the Call and Pos
Post a Comment
Read more
More posts