Showing posts with the label can
Show all 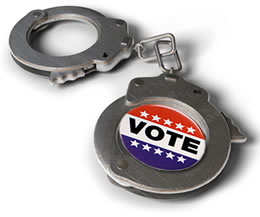 Editorial by Johnette E. Jernigan, Cleveland Urban News.Com Reporter   ( www.clevelandurbannews.com ) Cleveland Urban News.Com Reporter and Editorial Writer Johnette Jernigan (left) poses with Obama for America  Campaign Regional Press Secretary Laura Allen before a campaign visit by First Lady Michelle Obama to Progressive Field in Cleveland on May 21, 2012 By Johnette Jernigan: Editorial Writer As battle grounds are drawn here in the state of Ohio and voter turnout is  anticipated to be high in a neck and neck race between President Barack Obama and  republican presidential nominee Mitt Romney, it is important to not only register  new voters, but to also give disenfranchised voters accurate information on the right  to vote. Former offenders could be taking themselves out of the political process  inadvertently due to misinformation. Knowledge is no doubt power, particularly when it pertains to voting in a close election.  Ohio is one of 13 states along with the Distr
Post a Comment
Read more
More posts