Showing posts with the label Journalist Johnette Jernigan
Show all

A one-on-one interview with CNN contributor and TV-One commentator Roland Martin on President Obama, Romney, and whether First Lady Michelle Obama is 'too Black,' latest CBS poll has Obama and Romney in statistical tie 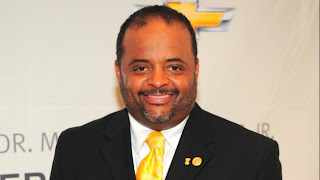 Roland Martin By Johnnette Jernigan Cleveland, Ohio-This is a one-on-one interview with CNN  contributor  and TV-One commentator Roland Martin, a nationally known Black political analyst. In this short but engaged interview Martin gives his views on the Democratic and Republican campaigns for President of the United States of America. He also discusses his take on the suggestion by some right wing conservatives that First Lady Michelle Obama is "too Black." President Barack Obama, a Democrat, will face former Massachusetts Gov. Mitt Romney, the presumptive nominee for the Republican Party, for the upcoming November election for president. The below interview was undertaken during the heat of the fight for the Republican nomination for president and before Romney became the presumptive  nominee. It is  printed  here because it still has  significance  as America's Black community and others prepare for a showdown as to a tight race for the White Hous
Post a Comment
Read more
More posts