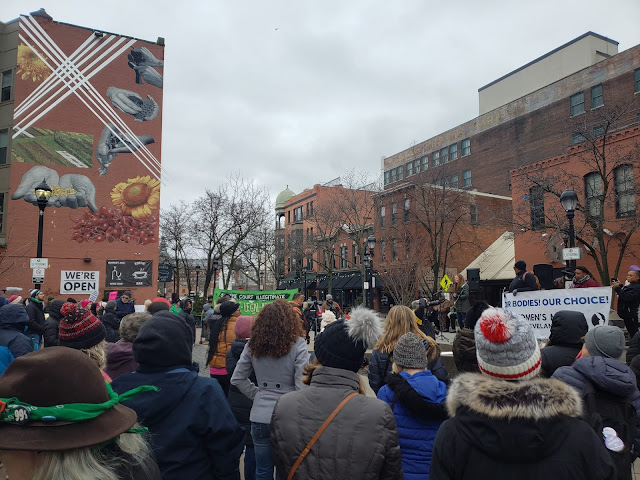 CLEVELAND, Ohio- Hundreds attended Women's March Cleveland's sixth anniversary rally and march on Saturday, Jan. 21, 2023  at Market Square Park in the city's Ohio City neighborhood, a sister march to marches in cities nationwide that day and an event that also celebrated the 50th anniversary of Roe v Wade, which is today.

"Thanks to all who heped to make Saturday's event in Cleveland a success," said Women's March Cleveland head organizer Kathy Wray Coleman, who added that "activists will picket if the doctors of Ohio Physicians for Reproductive Rights are harassed by the media or people against reproductive freedoms for women for pushing an abortion ballot initiative."

Media that covered the gathering included Cleveland television channels 5 and 3, the Call and Post Newspaper, Scene Magazine, and clevelandurbannews.com

The rally lasted for about an hour where participants booed former president Donald Trump, a Republican who lost reelection to current Democratic President Joe Biden and is a 2024 presidential candidate. It was followed by a march.

"Boo"  chanted activists when organizers explained that women's march groups were formed around the country six years ago in response to his misogynist and anti-female rhetoric during the 2016 presidential campaign against Democrat Hillary Clinton and that Trump wants to be president again. They also cheered on the new group Ohio Physicians for Reproductive Rights after one of its founders, Dr Lauren Beene, spoke flanked by fellow doctors and said that her group is leading a ballot initiative to enshrine the legal right to abortion in the Ohio Constitution.

Alfred Porter Jr., whose Black on Black Crime group also fights for Black women women, called out the names of the 11 Black women murder on Imperial Avenue in Cleveland by serialkiller Sowell and Katie Paris, whose group Red, Wine and Blue helped Women's March organize Saturday's event, said that her group knows the importance of standing with Black women as Cleveland is a largely Black city and Antonio and Brent urged activists to keep up the fight for women and to support the doctors relative to the abortion ballot initiative. And Dr. Rice, a retired Cleveland schools princpal, expressed support for President Biden's college student loan forgiveness program, which is on hold and awaiting review by the U.S. Supreme Court.

The Rev Benjamin Gohlstin of the United Pastors in Mission was also a speaker and he told the women during his speech that Black men are still marginalized and that until Blacks secure the unfettered right to vote the Democratic process remains questionable.

The Supreme Court, on June 24, 2022, overturned Roe v Wade and relegated the authority to either restrict or outright outlaw abortion to the respective state legislatures nationwide.

Women's March Cleveland is a grassroots women's rights group comprised primarily of greater Cleveland activist women that first established in 2017 when thousands of women in Cleveland and millions as a whole in sister cities nationwide marched in the streets in their respective cities following then president Donald Trump's inauguration. It was one of the largest single day marches in American history, Women's March Cleveland has over 4,600 members and in addition to an anniversary march in January of each years it hosts intermittent marches, many of them sister marches with other cities on women's rights. The issues the group fights for, practically all of them public policy matters impacting women, also include poverty, excessive force, and the nation's intrinsically racist legal system.

But reproductive rights have also become a central premise of the organization, along with rape, murder and other heinous violence against women in the largely Black major American city of Cleveland, a disproportionate number of the victims Black,  Hispanic, and poor. Women's rights remain under attack in Ohio and elsewhere, Women’s March Cleveland organizers said.