Showing posts with the label Coach Byron Scott
Show all

Are the Cleveland Cavaliers a team in transition or a team with an identity crisis?

By Karl Kimbrough (pictured), Cleveland Urban News.Com Sportswriter (kimbrough@clevelandurbannews.com).    Cleveland Urban News.Com and The Kathy Wray Coleman Online News Blog.Com, Ohio's No 1 and No 2 online Black news venues  ( www.clevelandurbannews.com )  Reach Cleveland Urban News.Com by email at editor@clevelandurbannews.com and by phone at 216-659-0473 CLEVELAND, Ohio -Since the 2010-2011 NBA basketball season the Cleveland Cavaliers have had one of the worst defensive teams in the league. Last season they were statistically last in defensive field goal percentage, giving up 47.6 percent.  Cleveland Cavaliers Coach Mike Brown When general manager Chris Grant fired former head Coach Byron Scott and brought Mike Brown back to replace him, it was no secret that Cavaliers management saw a need to overhaul the defense. So with that in mind, this season would be one of transition to a defensive culture. However, with so many offensive minded players would this truly
Post a Comment
Read more 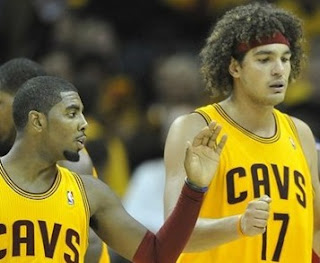 Cleveland Cavaliers Kyrie Irving (left) and Anderson Varejao By Karl Kimbrough, Cleveland Urban News.Com Sports Writer ( www.clevelandurbannews.com ) CLEVELAND,Ohio-The Washington Wizards strutted  into Cleveland Tuesday night looking to steal a win away from the Cleveland Cavaliers but came out a loser as Kyrie Irving and Anderson Varejao led the team to a 94 to 84 opening season victory over the Wizards.  Cavaliers Coach Byron Scott said that he was pleased with an opening home win in the city's Quicken Loans Arena. “For a home opener-first game I thought our guys played pretty well," said Scott. The Cavaliers had mustard a commanding 12 point lead at the start of the fourth quarter as the Wizards trailed, 74-62. But  a  14- run by the Wizards came  after Irving and the starters took a break and the second unit entered the game, making the score 74-76 in favor of the Wizards.  Wondering how long he could keep his starters out, Coach Scott brought Irving a
Post a Comment
Read more
More posts