Showing posts with the label Charleta Tavares ann
Show all

Black women lawmakers were the only women to speak against the fetal heartbeat bill on the Ohio Senate floor this week, an anti-abortion bill that passed the Ohio Senate and heads to the Ohio House of Representatives for it to consider passing an amended version of the bill that bans abortion in Ohio when a fetal heartbeat is detected...."Thank you Ohio Senators Charleta B. Tavares, Sandra Williams, and Edna Brown for being the only women out of six in the Ohio Senate to rise up and advocate on behalf of all women throughout the state of Ohio," said Rhiannon Childs, digital communications manager for Planned Parenthood Advocates of Ohio and also the executive director of Women's March Ohio.... Tavares is a Columbus Democrat, Williams is a Cleveland Democrat, and Brown is a Toledo Democrat and Minority Whip of the Ohio Senate....By editor Kathy Wray Coleman of Clevelandurbannews.com and Kathywraycolemanonlinenewsblog.com, Ohio's most read Black digital newspaper and Black blog 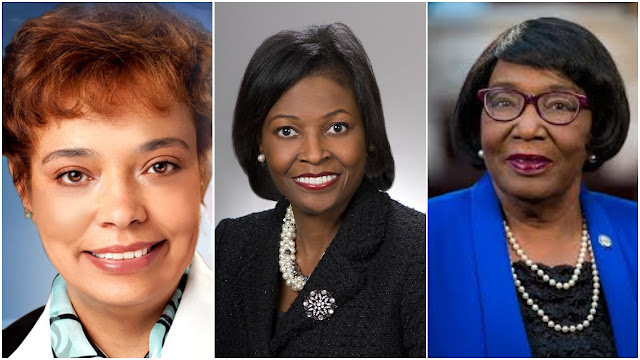 From left: Ohio Senator Charleta Tarvares, a Columbus Democrat, Sandra Williams, a Cleveland Democrat, and Edna Brown, a Toledo Democrat and Minority Whip in the Ohio Senate Clevelandurbannews.com and Kathywraycolemanonlinenewsblog.com , Ohio's most read Black digital newspaper and Black blog with some 5 million views on Google Plus alone.Tel: (216) 659-0473 and Email: editor@clevelandurbannews.com . By Kathy Wray Coleman, editor CLEVELANDURBANNEWS.COM-CLEVELAND, Ohio- The only women to speak on the Senate floor today when the Republican dominated Ohio Senate passed a bill that makes it illegal to perform an abortion in Ohio once a fetal heartbeat is detected were Black women lawmakers. The bill now heads to the House of Representatives, which had passed a more stringent bill that bans abortion as early as six weeks, for a vote on whether to pass the bill with amendments imposed by the senate. "Thank you Ohio Senators  Charleta B. Tavares ,  Sandra Wi
Post a Comment
Read more
More posts