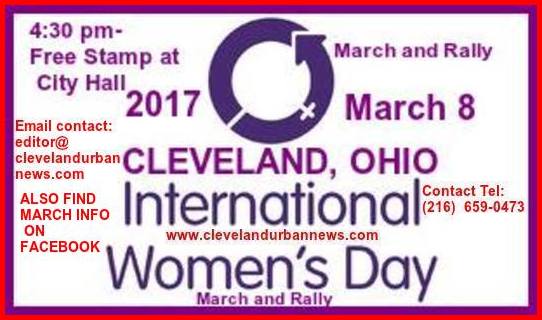 CLICK HERE TO GO TO THE FACEBOOK PAGE OF THE INTERNATIONAL WOMEN'S DAY MARCH CLEVELAND 2017   THIS MARCH IS NOT ASSOCIATED WITH ANY OTHER MARCH OTHER THAN THE NATIONAL INTERNATIONAL MARCH 2017 By  ClevelandUrbanNews.Com  and  theKathyWrayColemanOnlineNewsBlog.Com:  INTERNATIONAL WOMEN'S DAY-CLEVELAND RALLY AND MARCH, WEDNESDAY, MARCH 8, 2017 : International Women's Day March 8, 2017 4:30 pm rally in Cleveland, Ohio beginning at the Free Stamp at Willard Park next to Cleveland City Hall with 5:30 pm march that will end outside of the Old Stone Church on Ontario Avenue on Public Square. Contacts are Kathy at 216-659-0473 and Don at 216- 255-1576. Issues include the Violence Against  Women Act, our children, economics, education, welfare reform, voting rights, reproductive rights, healthcare, racism, sexism, religious discrimination, social security and medicaid, immigration matters, the repeal of LGBT initiatives by the Trump administration, and the legal system as i
Read more
More posts