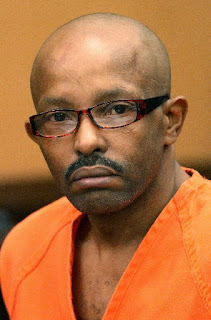 Convicted serial killer Anthony Sowell,  who strangled and murdered 11 Black  women at his then home on Imperial Avenue i n Cleveland, Ohio  ( www.clevelandurbannews.com ). Reach us by phone at 216-659-0473 and by email at editor@clevelandurbannews.com RALLY..RALLY...RALLY!!!!!!!...PASS THIS ON PLEASE PEOPLE..BRING PROTEST SIGNS COMMUNITY ACTIVISTS.. TO ALL MEDIA FOR IMMEDIATE RELEASE...................................Contacts are Imperial Women activist group at 216-659-0473 and Black on Black Crime Inc at 216-704-5036 What:/When/Where: Rally and press conference at 4:45 pm on August 22, at the Chateau Mansion, 13124 Euclid Ave, to address the fact that the courts have branded violence against innocent Black women raped and murdered, through the dismissal last week of claims around negligence by Cleveland police, city officials  of missing persons reports, other actions,  as to the Imperial Avenue Murders by convicted serial killer Anthony Sowell,  "FRIVOLOUS."
Post a Comment
Read more
More posts