Bernie Sanders to speak at City Club of Cleveland on May 1, 2017 where Obama spoke in 2015 and www.clevelandurbannews.com has press clearance for the event....A 2016 presidential candidate, Sanders spoke in 2016 at Olivet Church in Cleveland and so did Hillary Clinton and his speech on May 1 will address education, healthcare, immigration, President Donald Trump and racial injustice, among other issues 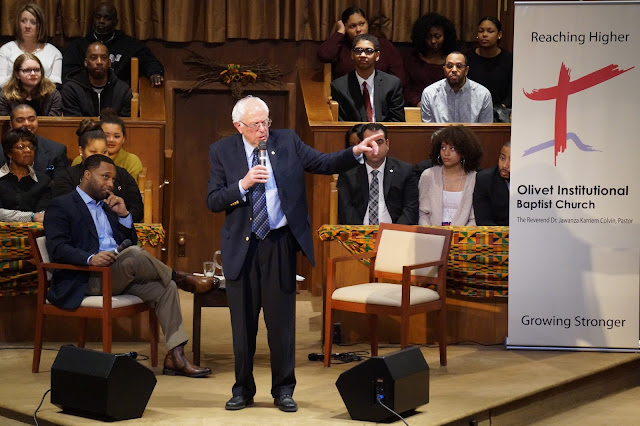 U.S. Senator Bernie Sanders of Vermont is the guest speaker at a 9 am breakfast on May 1, 2017 at the City Club in Cleveland, Ohio. Above Sanders speaks on Feb. 25, 2016 at the prominent Olivet Institutional Baptist Church on Cleveland's largely Black east side, though the senator lost the 2016 Democratic primary for president to Hillary Clinton, who subsequently lost the November 2016 general election to now President Donald Trump, a Republican. To the left of Sanders in the picture above is the Rev Dr Jawanza Colvin, senior pastor at Olivet (Photo by Rhonda Crowder) ClevelandUrbanNews.Com  and the    KathyWrayColemanOnlineNnewsBlog.Com  , Ohio's most read digital Black newspaper with some 4 million readers on Google Plus alone. And the  ClevelandUrbanNews.Com  website  stats reveal some 26 million hits since 2012. Tel: (216)  659-0473. Email: editor@clevelandurbannews.com   Kathy Wray Coleman, editor-in-chief, and who trained for 17 years at the Call and Post Newspaper in
Read more
More posts