Showing posts with the label Dan Ficker
Show all

Was the deadly 137 bullets Cleveland police shooting of unarmed Blacks Malissa Williams and Timothy Russell self defense or murder?... Watch the 19 Action News coverage by Reporter Dan Deroos with the affiliated news video here at Cleveland Urban News.com.... Deroos and News Channels 3, 5, and 8 all were there at the April 24 rally that addressed that question, a rally led by Imperial Women Leader Kathy Wray Coleman that drew some 300 people and was sponsored by Imperial Women, Black on Black Crime Inc., The Oppressed People's Nation, and other activists groups at the Chateau Mansion in East Cleveland ...Community activists and victims family members will rally again on April 29 at 6 pm in front of Cleveland City Hall... (Note: The April 24 rally also dealt with unjustified Cleveland police shootings of Kenneth Smith and Daniel Ficker, and the unsolved rape and murders of Black women Jazmine Trotter and Christine Malone, issues that will also be addressed at the upcoming April 29, Cleveland City Hall rally) 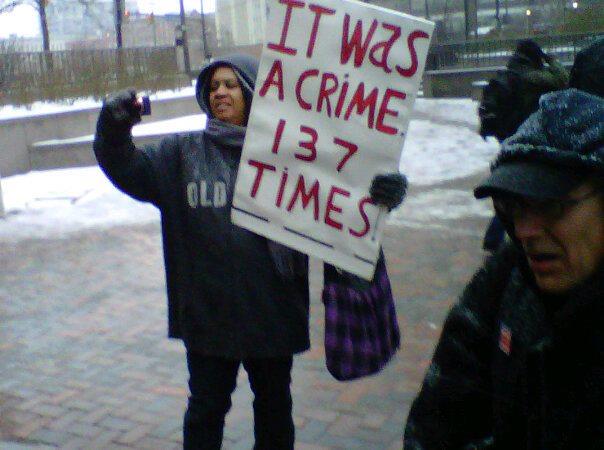 A woman holds up a protest sign at a rally at Public Square in downtown Cleveland that highlights that unarmed Blacks Malissa Williams and Tim Russell were gunned down with 137 rounds of ammunition by a group of White Cleveland police officers that have yet to be criminally charged and are still on the job. The unprecedented shooting occurred late last year following a car chase that ultimately culminated in 65 police cars and over 100 police officers. The chase began from a downtown Cleveland location and ended in neighboring East Cleveland with a hail of bullets. One police officer jumped on the hood of the 1979 Chevy Malibu that Russell was driving with Williams as a passenger and shot through the front windshield over 40 times.  Community activists and victims family members will  hold another of several protests over the issue that has caused racial unrest and has increased tensions between police and the Black community at 6 pm on April 29 at Cleveland City Hall (Next to the w
Post a Comment
Read more
More posts