Showing posts with the label Cleveland protest
Show all 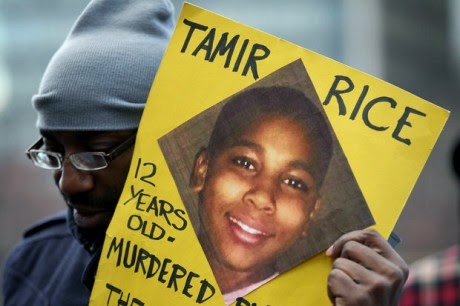 A protester rallies for 12-year-old Tamir Rice, who was shot and killed by Cleveland police on Nov. 22 for sporting a pellet toy gun at a public park on the city's largely White west side. Several events over the weekend drew protesters as far away as Ferguson, Missouri to the largely Black major metropolitan city of Cleveland, and highlighted police killings of unarmed Black men and boys throughout the country, including Michael Brown, and Eric Garner. Miles away, and in an unrelated incident in New York City, but also on Saturday afternoon, two on-duty New York police officers were shot and killed execution style by a suspected gunman who took his own life with a self inflicted gun shot wound. Read about both incidents in the below article by Cleveland Urban News.Com, Ohio's leader in Black digital news. By Kathy Wray Coleman, editor-in-chief, Cleveland Urban News.Com, and the Kathy Wray Coleman Online News Blog.com, Ohio's most read digital Black newspaper and n
Post a Comment
Read more
More posts