Showing posts with the label Prosecutor Mike O'Malley
Show all

Cleveland activists picket the Justice Center for justice for activist and investigative journalist Kathy Wray Coleman after Judge Nancy Fuerst attempts to hold an illegal trial against Coleman, who is falsely accused of assaulting but not touching four White cops....Fuerst attempted a trial without a written and journalized court order for a trial, Coleman's attorney, Brian McGraw, subsequently filing a motion saying Fuerst knows full well that the Ohio Supreme Court has ruled that orders by judges for trial and otherwise must be in writing and journalized on the case docket..... Led by Alfred Porter Jr. of Black on Black Crime Inc., activists also rallied against erroneous police killings of Black people, excessive bonds, malicious prosecutions and the overcrowding of the Cuyahoga County jail.... Speakers included Coleman, Gwendolyn Pitts, Cheryl Lessin, Brenda Adrine, Bill Swain, former Cleveland school board vice president Gerald C. Henley, Marva and David Patterson of the Carl Stokes Brigade, and Alicia Kirkman, whose son was erroneously killed by Cleveland police...The four cops at issue have refused to testify, a reason, in part, for Fuerst's illegal effort to hold trial without a written and journalized court order, their absence from a legally issued order for trial of which mandates dismissal of the case against Coleman, who is Black.....By Clevelandurbannews.com and Kathywraycolemanonlinenewsblog.com, Ohio's most read Black digital newspaper and Black blog with some 5 million views on Google Plus alone.Tel: (216) 659-0473 and Email: editor@clevelandurbannews.com 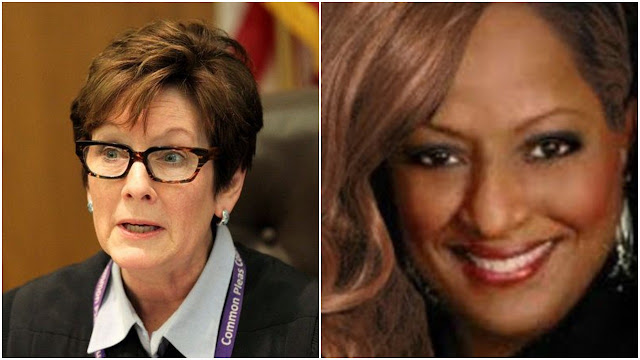 Trial rescheduled: The police harassment of activists trial of Cleveland activist and journalist Kathy Wray Coleman begins August 13, 2018 at 1:30 pm with a noon picket by community activists, and before Judge Nancy Fuerst in courtroom 15B at the Justice Center...Coleman is accused of assaulting but not touching four White cops who came to her home in May of 2015 slinging guns and rifles and allegedly calling her nigger, and without a 9-1-1 call or warrant.....There is no body cam, and no dash cam or video of the alleged incident because police and prosecutors tampered with the alleged video, and the speedy trial time has long passed.....Activist Alfred Porter Jr., who will lead the noon picket along with Art McKoy, said activists will fight for justice for Kathy Wray Coleman, who led the Cleveland womens' march earlier this year, with a vengeance....Coleman says the case is frivolous..."This is nothing but a high tech lynching premised on free speech violations and motivated by racial animus, sex discrimination, public corruption, foreclosure theft by JPMorgan Chase Bank attorneys and corrupt judges like Judge John O'Donnell, and judicial, prosecutorial and police misconduct" said Coleman. " I thank the community and community activists for their support and urge interested people to attend the trial." By www.clevelandurbannews.com and www.kathywraycolemanonlinenewsblog.com, Tel (216) 659-0473. Email: editor@clevelandurbannews.com 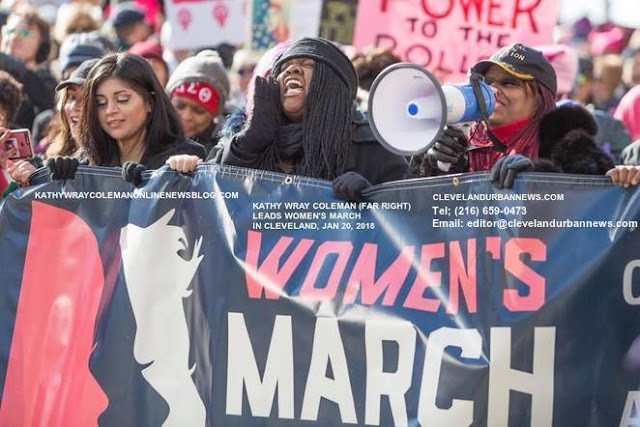 Activist Kathy Wray Coleman, far right, leads the women's march of some 7, 000 people in downtown Cleveland, Ohio on January 20, 2018. Coleman was also the opening speaker at the march Clevelandurbannews.com and Kathywraycolemanonlinenewsblog.com , Ohio's most read Black digital newspaper and Black blog with some 5 million views on Google Plus alone.Tel: (216) 659-0473 and Email: editor@clevelandurbannews.com. Kathy Wray Coleman, editor-in-chief, and who trained for 17 years at the Call and Post Newspaper in Cleveland, Ohio. We interviewed former president Barack Obama one-on-one when he was campaigning for president. As to the Obama interview, CLICK HERE TO READ THE ENTIRE ARTICLE AT CLEVELAND URBAN NEWS.COM, OHIO'S LEADER IN BLACK DIGITAL NEWS . Cleveland activist and journalist Kathy Wray Coleman CLEVELANDURBANNEWS.COM-CLEVELAND, Ohio- The harassment by police trial of Cleveland community activist and journalist Kathy Wray Coleman has been rescheduled to Mon
Post a Comment
Read more
More posts