Showing posts with the label London Breed
Show all 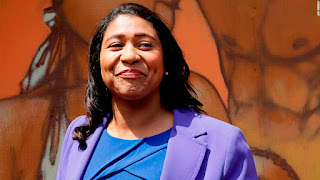 This is a CNN article San Francisco (CNN) For the first time, an African-American woman has been elected mayor of the city of San Francisco. London Breed reached the milestone on Wednesday, when her opponent conceded a tight mayoral race. Breed will serve until 2020, finishing the term of the late Mayor  Ed Lee, who died in December  at age 65. At a short news conference, Breed, 43, praised Lee and thanked her supporters, as well as the other candidates, including Mark Leno, a former state senator who conceded the race hours earlier. She struck an optimistic tone about the city's future.  CLICK HERE TO READ THE FULL ARTICLE AT CNN.COM ClevelandUrbanNews.Com and the   KathyWrayColemanOnlineNewsBlog.Com , Ohio's most read digital Black newspapers with some 5 million readers on Google Plus alone. And the ClevelandUrbanNews.Com website stats reveal some 26 million hits since 2012. Tel: (216) 659-0473. Email: editor@clevelandurbannews.com. Kathy Wray Coleman, editor-i
Post a Comment
Read more
More posts