Showing posts with the label Grammy
Show all

Clevelandurbannews.com reprint of one-on-one interview with John Legend by Kathy Wray Coleman as he campaigned for Barack Obama's presidential reelection bid in Ohio, Legend winning an Emmy for 'Jesus Christ Superstar' on September 9, 2018 to become the first Black man to win an Emmy, Grammy, Oscar and Tony ....Our interview herein is a one-on-one interview that reveals Legend's intellectual depth and his sensitivity to social ills impacting the Black community and others, and it was undertaken per the Obama campaign....Legend is a native of the pivotal state of Ohio....This reprint interview is by editor Kathy Wray Coleman and reporter Marc Churchill of Clevelandurbannews.com and Kathywraycolemanonlinenewsblog.com, Ohio's most read Black digital newspaper and Black blog with some 5 million views on Google Plus alone.Tel: (216) 659-0473 and Email: editor@clevelandurbannews.com 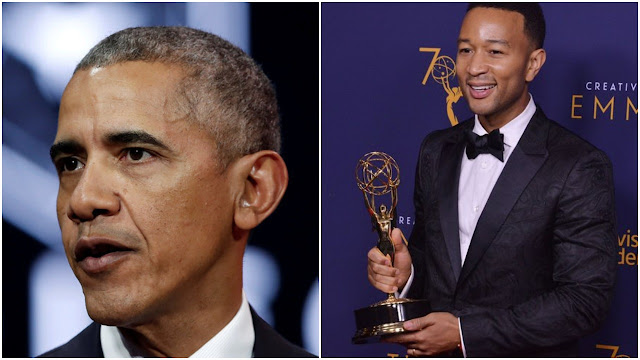 Former United States President Barack Obama (left) and  singer songwriter and producer John Legend, the first Black male artist to earn and Emmy, Grammy, Oscar and Tony and thus, EGOT status. Clevelandurbannews.com and Kathywraycolemanonlinenewsblog.com , Ohio's most read Black digital newspaper and Black blog with some 5 million views on Google Plus alone.Tel: (216) 659-0473 and Email: editor@clevelandurbanne ws.com. Kathy Wray Coleman, editor-in-chief, and who trained for 17 years at the Call and Post Newspaper in Cleveland, Ohio. We interviewed former president Barack Obama one-on-one when he was campaigning for president. As to the Obama interview, CLICK HERE TO READ THE ENTIRE ARTICLE AT CLEVELAND URBAN NEWS.COM, OHIO'S LEADER IN BLACK DIGITAL NEWS . Below is a reprint of our one-on-one interview with music legend John Legend when he was campaigning in Ohio for Obama's reelection as the nation's first Black president. It was originally published on S
Post a Comment
Read more
More posts