President Trump's State of the Union address panned as orchestrated lies, and 'Blacks were the only people brought to America in chains,' says state Representative Bill Patmon of Cleveland as to Trump's harassment of immigrants whom Trump says use 'chain migration' when they bring relatives into America as permitted by law..... Blacks are annoyed that the president seeks to erroneously take credit for the lower unemployment rates of Blacks and Latinos that came about under the Obama administration, though Patmon says the rates are still under par....Democratic Congresswomen Marcia Fudge and Marcy Kaptur, whose constituents include Clevelanders, say poor people, seniors on fixed-incomes, minorities and other disenfranchised groups do not benefit from the tax reform bill passed last year that Trump bragged on during his State of the Union speech, a speech that did not address Civil Rights, education, or the women's rights and MeToo movements ....By editor Kathy Wray Coleman of Clevelandurbannews.com and Kathywraycolemanonlinenewsblog.com, Ohio's most read Black digital newspaper and Black blog with some 5 million views on Google Plus alone.Tel: (216) 659-0473 and Email: editor@clevelandurbannews.com 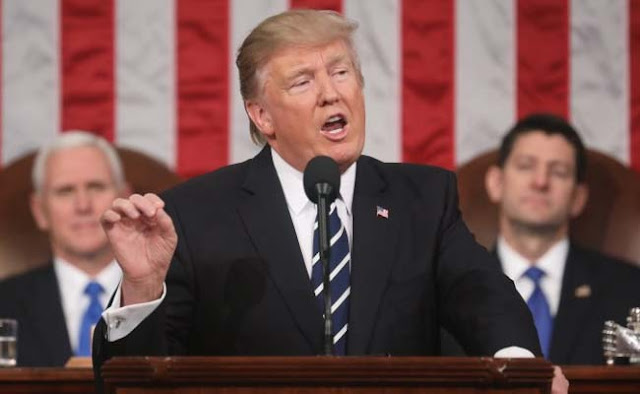 United States President Donald Trump Clevelandurbannews.com and Kathywraycolemanonlinenewsblog.com , Ohio's most read Black digital newspaper and Black blog with some 5 million views on Google Plus alone.Tel: (216) 659-0473 and Email: editor@clevelandurbannews.com. Kathy Wray Coleman, editor-in-chief, and who trained for 17 years at the Call and Post Newspaper in Cleveland, Ohio. We interviewed former president Barack Obama one-on-one when he was campaigning for president. As to the Obama interview, CLICK HERE TO READ THE ENTIRE ARTICLE AT CLEVELAND URBAN NEWS.COM, OHIO'S LEADER IN BLACK DIGITAL NEWS . By Kathy Wray Coleman, editor-in-chief CLEVELANDURBANNEWS.COM-WASHINGTON, D.C.-  United States President Donald Trump delivered his State of the Union address before a joint chamber of congress Tuesday night, his first since taking office last year amid a politically divided country on issues ranging from healthcare to tax reform, scientific research, public educatio
Post a Comment
Read more
More posts