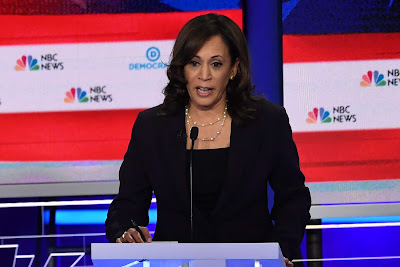 United States Senator and Democratic presidential candidate Kama Harris (D-CA) By   RYAN BORT  MIAMI, FLORIDA- The   opening night   of the first Democratic primary debates didn’t feature many confrontations. The same can’t be said for the second night, which featured several tense moments, most notably a fierce back-and-forth on race between   Kamala Harris   and   Joe Biden . After agreeing with Marianne Williamson that reparations haven’t been talked about “truthfully and honestly,” Harris turned her attention to Biden, whose history regarding bussing and, more recently, his  praise of a segregationist senator  he worked with decades ago, has come under fire. “I do not believe you are a racist,” Harris said, “and I agree with you when you commit yourself to the importance of finding common ground. But I also believe — and it’s personal, it was hurtful — to hear you talk about two United States senators who built their reputations and careers on the segregation of race in
Post a Comment
Read more
More posts