Cleveland teen Alianna DeFreeze's killer gets death penalty as the Imperial Women Coalition applauds Judge Carolyn Friedland's decision for death for Christopher Whitaker (pictured below as is Alianna), saying that while they are not pro-death penalty in general due in part to the racial and undemocratic discrepancies in the nation's legal system, that in this matter the punishment fits the crime...."We are pleased that Judge Carolyn Friedland accepted the jury's recommendation for the death penalty for Mr Whitaker, and we will follow this case relative to any appeals and other legal matters that might open a loop hole for this monster," said community activist Kathy Wray Coleman of Cleveland, who leads the Imperial Women Coalition, a women's and children's rights group founded relative to heightened rape and murders of Black women and girls and other women and girls in Cleveland since 2009....Coleman invites the community to the 5th Anniversary of the Cleveland East 93rd Street Serial Murders Rally and Vigil, 5 pm, March 28, 2018 at Bessemer and East 93rd Street to also remember Alianna DeFreeze, who was murdered last year in an area near the East 93rd Street killings of Jazmine Trotter, 20, Ashley Leszyeski, 21, Christine Malone, 45, and Jameela Hasan, 37 ....Activists will also remember Miriam Johnson, 31, whose dead body was discovered last week in a garbage can in Cleveland....Info at (216) 659-0473....By Clevelandurbannews.com and Kathywraycolemanonlinenewsblog.com, Ohio's most read Black digital newspaper and Black blog with some 5 million views on Google Plus alone.Tel: (216) 659-0473 and Email: editor@clevelandurbannews.com 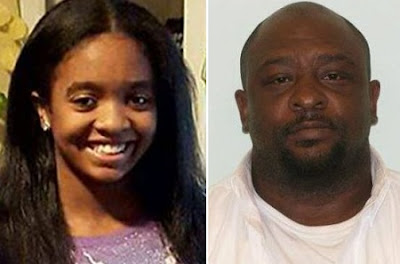 Judge to sentence the killer of Alianna DeFreeze on March 26, 2018: Imperial Women Coalition supports jury's recommendation for death for Christopher Whitaker saying he must be held accountable for his crimes against this 14-year-old Black girl that he kidnapped, raped, tortured and dismembered and activists say they hope he "rots in hell".....Whitaker will be sentenced by Cuyahoga County Court of Common Pleas Judge Carolyn Friedland....By Clevelandurbannews.com and Kathywraycolemanonlinenewsblog.com, Ohio's most read Black digital newspaper and Black blog with some 5 million views on Google Plus alone.Tel: (216) 659-0473 and Email: editor@clevelandurbannews.com

Fourteen-year-old Alianna DeFreeze of Cleveland, and her killer, 45-year-old Christopher Whitaker, who faces the death penalty  Clevelandurbannews.com and Kathywraycolemanonlinenewsblog.com , Ohio's most read Black digital newspaper and Black blog with some 5 million views on Google Plus alone.Tel: (216) 659-0473 and Email: editor@clevelandurbannews.com. Kathy Wray Coleman, editor-in-chief, and who trained for 17 years at the Call and Post Newspaper in Cleveland, Ohio. We interviewed former president Barack Obama one-on-one when he was campaigning for president. As to the Obama interview, CLICK HERE TO READ THE ENTIRE ARTICLE AT CLEVELAND URBAN NEWS.COM, OHIO'S LEADER IN BLACK DIGITAL NEWS . CLEVELAND URBAN NEWS.COM-CLEVELAND, Ohio -A Cuyahoga County jury last month recommended death for convicted murderer and teen rapist Christopher Whitaker, the sex offender who kidnapped, raped and dismembered 7th grader Alianna DeFreeze at an abandoned home in January of la
Post a Comment
Read more
More posts