Youngest Oscar nominee in history for leading role in a motion picture is nine-year-old Quvenzhané Wallis, who is Black and stars in the film 'Beasts of the Southern Wild,' which President Obama calls 'spectular,' Denzel Washington is the other Black Oscar nominee, and is nominated for best male actor in a leading role for his portrayal of an alcoholic airplane pilot in 'Flight' 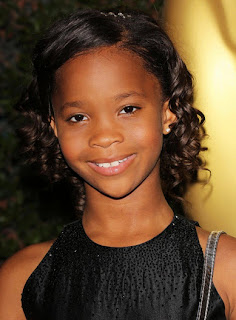 Quvenzhané Wallis Denzel Washington  By Johnette Jernigan, Cleveland Urban News. Com and The Cleveland Urban News.Com Blog, Ohio's Most Read Online Black  Newspaper  ( www.cleve landurbannews.com ) CLEVELAND, Ohio-Nine- year -old Quvenzhané Wallis (pronounced Kuh-VAHN-zuh-nay) is the star of the popular film  'Beasts of the Southern Wild,' and the youngest Oscar nominee in history in the category of leading role in a motion picture. And she is Black and extraordinarily talented, movie critics say. The young star faces Jessica Chastain, Jennifer Lawrence, Naomi Watts, and Riva Emmanuelle as contenders for best actress at this year's 2013 Academy Awards, which will broadcast live on ABC on Sunday, Feb. 24. The other Black nominated this year for an Oscar in a leading role is Denzel Washington, 58,  for his portrayal of an alcoholic airplane pilot i n "Flight." Washington has won two Golden Globe awards, an Academy award  in 1989 for suppor
Post a Comment
Read more
More posts