Showing posts with the label guns in classrooms
Show all

Ohio state Representative Bill Patmon opposes arming Ohio classroom teachers with guns as does the Federation of Teachers, an anti-Black proposal offered by President Trump and supported by the two Republican candidates for Ohio governor, though it is opposed by U.S. House Speaker Paul Ryan, a Republican, and the NAACP, among others.... A former Cleveland councilman of 12 years, Patmon is Black and has introduced some six bills on gun control, and he is term-limited as a state representative in Ohio and faces three Black Democrats in the May 8 primary election in his bid for the state senate.... Eight Democratic candidates are vying to replace Patmon as state representative of Ohio's tenth state house district....By editor Kathy Wray Coleman of Clevelandurbannews.com and Kathywraycolemanonlinenewsblog.com, Ohio's most read Black digital newspaper and Black blog with some 5 million views on Google Plus alone.Tel: (216) 659-0473 and Email: editor@clevelandurbannews.com 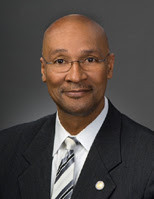 Ohio state Representative Bill Patmon (D-10), a Cleveland Democrat  and former city councilman who  opposes guns in the  hands of classroom teachers  in Ohio, and nationwide Clevelandurbannews.com and Kathywraycolemanonlinenewsblog.com , Ohio's most read Black digital newspaper and Black blog with some 5 million views on Google Plus alone.Tel: (216) 659-0473 and Email: editor@clevelandurbannews.com. Kathy Wray Coleman, editor-in-chief, and who trained for 17 years at the Call and Post Newspaper in Cleveland, Ohio. We interviewed former president Barack Obama one-on-one when he was campaigning for president. As to the Obama interview, CLICK HERE TO READ THE ENTIRE ARTICLE AT CLEVELAND URBAN NEWS.COM, OHIO'S LEADER IN BLACK DIGITAL NEWS . Comprehensive article by editor Kathy Wray Coleman CLEVELANDURBANNEWS.COM-CLEVELAND, Ohio- Ohio state Rep. Bill Patmon (D-10), a Cleveland Democrat, said in an interview yesterday that arming teachers with guns in classrooms in the n
Post a Comment
Read more
More posts