Showing posts with the label Carmen Perez
Show all

Women's March Ohio among Washington protesters against what the national women's movement says is 'a racist NRA' at the anti-gun violence march on July 14, 2017, the acquittal of the cop that killed Philando Castile also among the issues as data show that 75 percent of all domestic violence murder victims are women, and Black women are twice as likely as White women to be killed by domestic violence.... Women's March Ohio Executive Director Rhiannon Childs, who is Black and attended the rally and march in Washington, has reared her cousin's children for 10 years, the cousin an innocent victim of gun violence, Child says, and the main reason she rallied on July 14 in Washington....By editor Kathy Wray Coleman of Clevelandurbannews.com, Kathywraycolemanonlinenewsblog.com, and Imperialwomencoalition.com, Ohio's Black digital news leaders 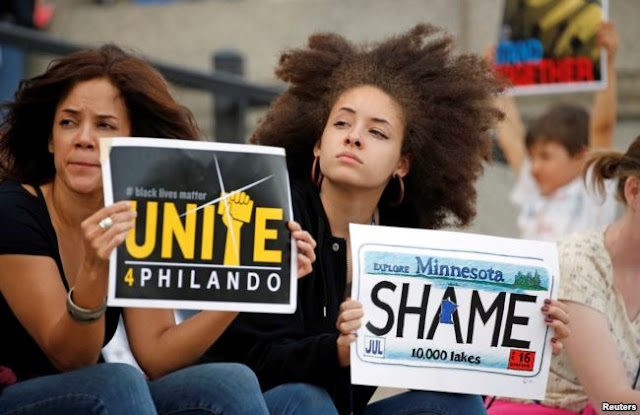 Two women hold protest signs at a protest at the nation's capital regarding the police killing last July of Philando Castile in Minnesota, the since fired cop that killed the unarmed Black man acquitted on June 16, 2017 of manslaughter and all other charges and fired the same day. On Friday, July 14, 2017 activists and organizers of  the national women's march out of Washington, D.C. that drew thousands of protests in cities across the country last January, including some 15,000 people to Public Square in downtown Cleveland for a sister march, marched with hundreds of activists from NRA headquarters in Fairfax, Virginia to the Justice Department in nation's capital to denounce the National Rifle Association (NRA), the nation's most influential gun-lobbying organization, and the acquittal of Castile's killer.  Women's March Washington, Ohio Chapter Executive Director Rhiannon Childs, at the anti- gun violence rally and march against the NRA in the nation&
Read more
More posts