Showing posts with the label 2013 inauguration
Show all

US government remains shutdown, Cleveland Urban News.Com reprints article on the Obama inauguration of 2013, Affordable Care Act (ObamaCare) was a highlight of inauguration speech by Obama 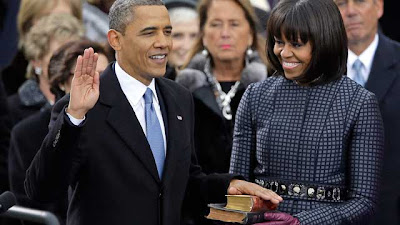 United States President Barack Obama takes the oath of office for a second term as president next to First Lady Michelle Obama at a swearing in ceremony on Jan 21, the day that Americans also celebrated the national holiday of slain Civil Rights leader the Rev. Dr. Martin Luther King Jr.     (Editor's Note: Below is the article on the swearing in of President Obama in January of this year, 2013, for a second term, and the inaugural festivities  Cleveland Urban News.Com reprints the article as the government remains shut down because Republicans in Congress are against the Affordable Care Act, also known as "ObamaCare," and they do not want all people to have healthcare, Obama says. Read the article, unedited, as Obamacare is a part of it. Cleveland Urban News.Com reiterates its support of President Barack Obama, the first Black president of the United States of America).  Led by Chief Justice John Roberts, a sharply divided U.S. Supreme Court last year upheld the
Post a Comment
Read more
More posts