Showing posts with the label E. Cleveland
Show all 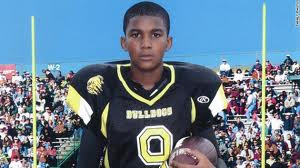 Trayvon Martin The Oppressed People's Nation By Kathy Wray Coleman EAST CLEVELAND, Ohio-Seasoned activist groups such as the Imperial Women, the Carl Stokes Brigade and Black on Black Crime will support the Oppressed People's Nation's "Trayvon Martin Skittles Rally," which is Sat. March 24 at 3 pm at Black on Black Headquarters in East Cleveland at McCall's Hotel, 14660 Euclid Ave. Contact Oppressed People's Nation event spokesperson Judy Martin at 216-990-0679 for more information. Yesterday some 200 community activists, mainly college and high school students, rallied for Martin at Tower City in downtown Cleveland. "Because Trayvon was murdered and his only weapon was a bag of skittles candy, we urge people to bring a bag of skittles to the rally and we will send them to the Sandford Police Department in Florida," said Ernest Smith, the leader of the Oppressed People's Nation, a grassroots group whose members are in the
Post a Comment
Read more
More posts