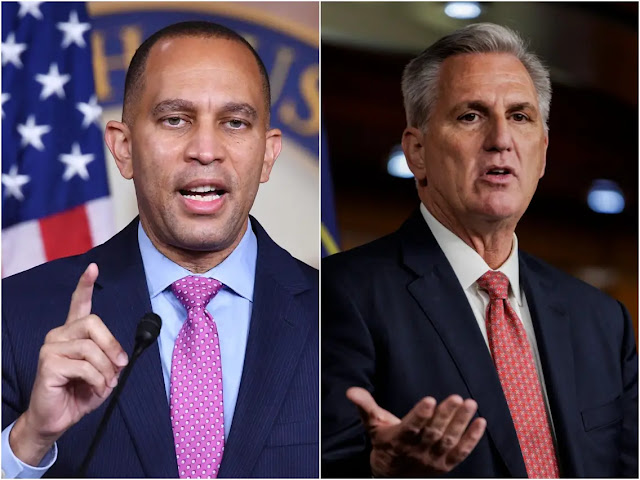 Newly elected minority leader of the U.S. House of Representative Hakeem Jeffries, a New York Democrat and the first Black to hold the post and to lead a political party in Congress, and newly elected house speaker Kevin McCarthy, a California Republican 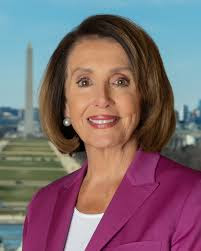 In Congress since 2007 and currently representing California's 23rd congressional district, McCarthy won with 216 votes out of 222.  After the vote he accepted the gavel from new House Minority Leader Hakeem Jeffries of Brooklyn, New York, the first Black elected to lead a political party in Congress and of whom fellow Democrats had elected unanimously to the post by a vote of 212.

Jeffries gave his acceptance speech before introducing Mccarthy to lawmakers as their new speaker. Both had to capture a majority of votes from their respective parties to win the leadership roles, which is what McCarthy had difficulty doing until the 15th vote

The son of a firefighter and the grandson of immigrants, McCarthy commended Jeffries, 52, for getting "100 percent of the vote" from  his party and said that  he would not be playing party politics because "my responsibility, our responsibility is to our country."  He added that he will make sure that "law enforcement is respected and criminals are prosecuted." And he went on to announce a litany of pro Republican agendas for the 118th Congress from what he said would be secure borders to a decrease in government spending and intense investigations of political wrongdoing, though he did not specifically refer to the Biden administration as he as done in the past.

The new speaker also pledged to remain professional relative to his congressional dealings with Democrats.

"I promise our debates will be passionate but they will not be personal, that is my commitment to you," McCarthy told Jeffries before a full chamber of Democratic and Republican federal lawmakers, including Jeffries' mentor and McCarthy's predecessor, former speaker Nancy Pelosi, a California Democrat and former minority leader who served as the 52nd speaker from 2007 to 2011 and again from 2019 to 2023.

"It's an honor to stand on your broad shoulders. Thank you madam speaker for all you have done," said McCarthy of Pelosi, in spite of a lukewarm relationship with the former speaker with whom he was often at odds regarding congressional matters.

Republicans were able to wrestle control of the House of Representatives from the Democrats via the November midterm elections but they only have a slim majority, the Democrats holding on to the Senate, and with also a slim majority, all of it fodder, say pundits, for continual infighting and the partisan bickering that has become all so routine.

The congressman representing New York's 57th congressional district and a former state representative and corporate lawyer, Jeffries spoke at length via his acceptance speech before handing the gavel to McCarthy and introducing him as the new speaker, his speech a world apart from the conservative McCarthy.  After praising Pelosi, 82, as his mentor and an iconic former speaker, the minority leader said that he intends to fight racism, and sexism, and xenophobia, and he promoted  a gambit of issues dear to congressional Democrats such as climate and gun control, education, immigration and legal system reforms, and tax cuts.

He remembered the late congressman  and civil rights leader John Lewis and he spoke on voting rights. He took aim against the House GOP's assault on women as he usually does, saying that he will do everything in his power to fight for women and "reproductive freedoms."

While both McCarthy and Jeffries received standing ovations, Jeffries is obviously a motivational speaker, and a charismatic Barack Obama-type orator, which will likely prove beneficial to Democrats, sources said.

By Kathy Wray Coleman. Coleman is a seasoned Black political, legal and investigative journalist out of Cleveland, Ohio who trained for 17 years with the Call and Post Newspaper.