Showing posts with the label Amnda Berry
Show all 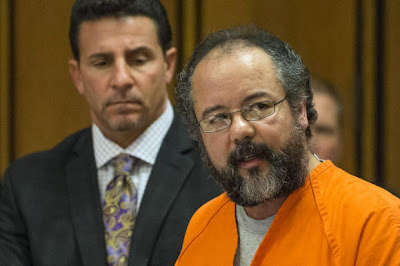 Ariel Castro, 53,  at sentencing on August 1, 2013 at the Cuyahoga County Court of Common Pleas at the Justice Center in in downtown Cleveland, Ohio. Next to him is one of Castro's court appointed attorney's, though demolition  crews found $22,000 when his home on the city's west side  was demolished about a week after sentencing. Castro was found dead in his prison cell yesterday evening at about  9:20 pm  .       The Kathy Wray Coleman Online News Blog.Com, Ohio's No 1 and No 2 online Black newspapers  ( www.kathywraycolemanonlinenewsblog.com ) and ( www.clevelandurbannews.com ). Reach us by phone at 216-659-0473 and by email at editor@clevelandurbannews.com "While we would not condone any malfeasance around Mr. Castro's death, and to date that does not seem to be the case,  and while we certainly believe that life is worth living, we hope he rots in hell," ..... Cleveland area community activist Kathy Wray Coleman, who leads the Imperial W
Post a Comment
Read more
More posts